Home News Girl punched in the face at London Mela

Police appeal for video footage in attempt to identify attacker 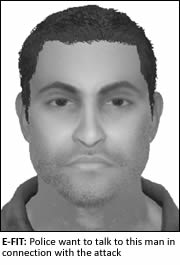 POLICE are hunting a man who repeatedly punched a teenage girl in the face at the London Mela.
The 16-year-old victim, who was at the event in Gunnersbury Park with her family on 4 September, was punched in the face three times after she objected to her attacker dancing with her.
Detectives have released an E-fit of the man and are appealing for information from the public.
In particular they are eager to see video footage from the Mela saying the attack, which happened at around 5.35pm, occurred during singer Jay Sean’s performance on stage.
The victim had been dancing at the front of the main stage at the park when she was approached by a man. He made attempts to get close-up and dance with her, which she resisted. The man subsequently punched her in the face three times causing a front tooth to be knocked out. The suspect then made off into the crowd.
The victim immediately alerted nearby police officers to the incident and First Aid and was given at the scene. The victim did not require hospital treatment.
The suspect is described as light-skinned and Asian in appearance, approximately 28-30 years old and around 5’6″ in height. He is of a stocky build with short fluffy hair a square shaped face. He was wearing a grey/blue long sleeved shirt and 3/4 length trousers. He had been wearing a black baseball cap, with a yellow underside, which fell off his head during the assault.
Detective Sergeant Martin Siertsema, of the Community Safety Unit based at Houslow, said:
“We are appealing to anyone who may have witnessed the attack or recognises the suspect via our e-fit. In particular we are keen to speak to anyone who may have been recording the on-stage act, singer Jay Sean, who at the time of the assault was ten minutes into his set. Given the close proximity of the incident to the front of the main stage, it is possible that recordings made on mobile devices may have picked up the event taking place.”
Anyone with information is asked to call Hounslow CID on 020 82476160; or if you wish to remain anonymous, call Crimestoppers on 0800 555 111.