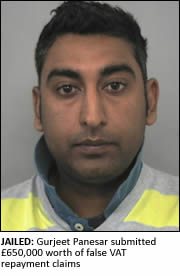 A NORTHAMPTON man who built up large debts while training to become a professional golfer has been jailed for two years and four months for VAT fraud.
Gurjeet Panesar, 32, pleaded guilty to seventeen offences of fraud at Oxford Crown Court.
He stole £650,000 by submitting false VAT repayment claims to HM Revenue & Customs (HMRC).
Panesar used his crime profits to fund a lavish lifestyle. He purchased a Ferrari and a Porsche during the fraud and built up large debts while training to become a professional golfer.
The court was told Panesar was the sole director of UK Choppers International Ltd and UK Custom Choppers Ltd based in Brackley, Northamptonshire. Both companies were alleged to be involved in the production of bespoke Harley Davidson motorcycles. One company was set up to deal with the supposed manufacture and sales of customised bikes to the UK market while the other dealt with exports.
However, in reality very little genuine trading took place. Panesar scanned and amended purchase invoices to produce false paperwork for both companies. He also produced false sales invoices to make the business look credible and false bank statements to further support a legitimate trade. He then claimed large VAT repayments using these false documents as cover.
Confiscation proceedings to reclaim the criminal profits are underway.
Gary Lampon, Assistant Director of Criminal Investigation for HMRC, said: “This sentence will send a clear message to anyone considering fraud against HMRC. We are determined to tackle those involved in tax evasion and fraud and bring them before the courts. With over £10 billion being stolen from UK finances each year by criminals involved in the hidden economy its serious crime which we are determined to eradicate.”