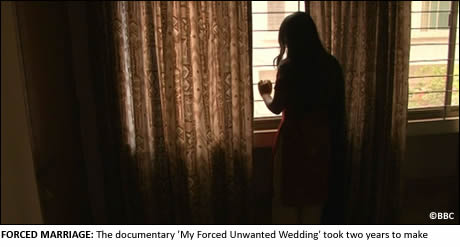 BBC Three is to air an hour-long documentary showing two British teenage girls trying to escape from forced marriages.
The hour-long programme called ‘My Forced Unwanted Wedding’ took two years to make and tells the story of the two teenagers aged 18 and 17.
Both girls have had their identities changed for protection purposes.
Alia, 18, was forced to marry a man twice her age during a visit to Pakistan.
Now back in the UK and under pressure to go back to her husband, Alia reveals her painful story.
Meanwhile, in Bangladesh, 17-year-old Jessie has been promised in marriage to a cousin more than twice her age. She faces being cast out by her family if she refuses.
My Forced Unwanted Wedding follows Alia and Jessie as they seek the help of the British authorities. In Bangladesh, a team from the British Consulate travels under police guard to reach Jessie. They must act quickly. If the men of the family return while they’re there, the situation could become volatile.
In Britain the police have now set up a network of specialist units to help the increasing numbers of forced marriage victims. Officers from a unit in Lancashire try and help Alia decide whether to stay in a loveless forced marriage or face serious trouble from her family and start life afresh on her own.
My Forced Unwanted Wedding, Monday 19 September, 9.00-10.00pm BBC THREE