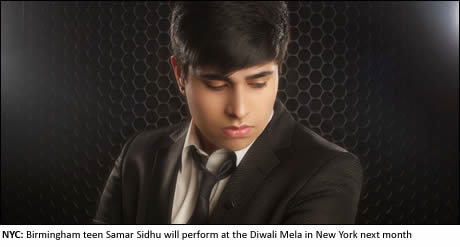 A BIRMINGHAM teenager is jetting off to the Big Apple next month to take part in one of America’s biggest Diwali events.
Singer Samar Sidhu will perform at the Diwali Mela in New York on 2 October in what can only be described as the biggest show of the teen’s pop career.
The 17-year-old – dubbed the ‘Asian Justin Bieber’ – launched his singing career in July with the debut release of his single ‘Mukhara’.
And he’s gearing up for the release of his next two singles – ‘Tu Hi Tu’ and ‘Chorniye’ – with an amazing trip to the Big Apple.
“I never thought that I’d be flying off to the Big Apple this early in my career,” Samar told The Asian Today.
“This has been an incredible Summer for me – from releasing ‘Mukhara’ to performing live at the Melas and meeting so many of my new fans – it’s been awesome. The feedback I got from the public inspired me to go back into the studio again to complete these two tracks ready for the pre-Diwali party season.
I can’t wait to see how fans both here and in the United States like ‘Tu Hi Tu’ and ‘Chorniye’,” he added.
Despite only being 17, Samar is already becoming a recognised name on the Asian music scene. His father may be one of the most recognised names on the Asian music scene – British Bhangra pioneer Amarjit Sidhu – but this teen is already becoming the topic of conversation amongst some of Asian music industries most respected stars.
Shin, lead singer of DCS, said: “Samar is the new generation of talent, and it’s great to create music for someone with such passion. He is young, energetic and hungry for success.
“It’s fantastic for me to see what we all created back in the day living on – not just with us, but with the new audiences.”