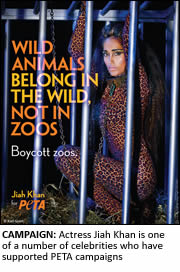 CROUCHED in a cage wearing a leopard-print bodysuit next to the words “Wild Animals Belong in the Wild. Boycott Zoos”, Bollywood beauty Jiah Khan stars in a brand-new ad for People for the Ethical Treatment of Animals (PETA).
Shot by ace photographer Karl Grant, the ad aims to spread the word that animals who are locked up in zoos suffer and that their true natures can’t possibly be appreciated when they are kept in captivity.
“Actors choose to entertain, but animals locked away in zoos are given no choice”, says Jiah. “All beings treasure their freedom above all else and that applies to tigers, elephants, bears, monkeys and other animals too.”
An Oxford University study based on four decades of observing animals in captivity and in the wild found that animals such as polar bears, lions, tigers and cheetahs “show the most evidence of stress and/or psychological dysfunction in captivity”. Investigations of zoos by PETA affiliates have revealed horrific conditions, including deficiencies in food, drinking water, housing, veterinary care, environmental enrichment, safety and security.
Appearing opposite Bollywood legend Amitabh Bachchan, Khan – who was raised in Chelsea, London – debuted in the controversial 2007 film Nishabd. Her most recent release was the film Housefull.
A spokesperson for PETA said: “Hundreds of thousands of animals languish in zoos around the world. Because these animals are denied everything that is natural and important to them, they express their frustration and loneliness through obsessive, repetitive and even self-destructive behaviour, such as pacing, head-bobbing and self-mutilation.”