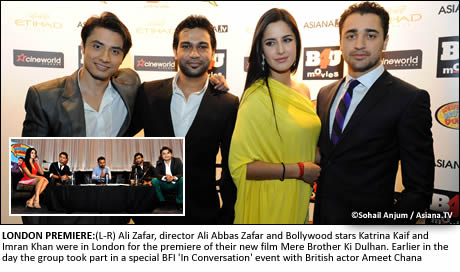 BOLLYWOOD stars Imran Khan and Katrina Kaif stunned crowds in London at the premiere of their new film Mere Brother Ki Dulhan.
The duo were joined by co-star Ali Zafar and director Ali Abbas Zafar for the red-carpet premiere at Cineworld Cinema in Feltham.
Fans of all ages and from across London gathered outside the cinema to catch a glimpse of their favourite Bollywood ‘dulhan’, the newest Khan-on-the-block and the Pop Prince of Pakistan, Ali Zafar. It was a state of frenzied excitement, as dancers dressed in traditional Punjabi costumes welcomed the stars of the film and the director with dholaks, trumpets.
Earlier the group took part in a special BFI ‘In Conversation’ event hosted by former Eastenders star Ameet Chana to talk about their new film.
Mere Brother Ki Dulhan is an out-and-out romantic comedy set in the world of the upper middleclass of Northern India. Kush Agnihotri (Imran Khan) is looking for the ideal Indian bride for his London-abiding brother Luv Agnihotri (Ali Zafar). After an array of entertaining, wacky and mildly crazy encounters with several families, Kush finally finds the perfect girl in Dimple Dixit (Katrina Kaif). Luv is smitten by her, the families approve of one another, and preparations for the wedding are in full swing… but there is just one problem: Kush and Dimple fall in love! What follows is a comical and unpredictable series of events in this topsy-turvy tale of love.
“The comedy is over-played and deliberate in this film; it’s a louder style of humour which is more Ali’s (director) form,” Imran said, while Katrina admitted that she herself was surprised at the lead pair’s chemistry in the film. “You actually feel the romantic moments in the film, despite it essentially being a complete comedy,” she said, to which Imran added, “You can’t develop chemistry, it’s either there or its not. We were fortunate that it worked with us!”
Being a love triangle, could the stars relate to their characters? “An actor doesn’t always need personal experience to relate to a role,” Katrina smiled, telling us that she’s even played a murderer in one of her films!
The recently married Imran, meanwhile, revealed his love tips: “A marriage works on the basis of the foundation of the relationship, the actual bricks and mortar. In the end, it all boils down to how you are with your partner. You can make grand romantic gestures and give her a bouquet of roses every day, but that could be all paint and plaster. I believe in actually making it work, rather than making it look like its working!”
Mere Brother Ki Dulhan is out on nationwide release now