Hundreds of samples taken during hunt for killer of Mohammed Arshad 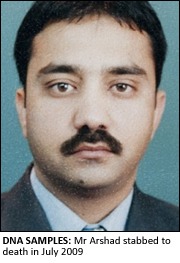 HUNDREDS of DNA samples taken from residents during the hunt for the killer of Birmingham taxi driver Mohammed Arshad are to be destroyed next week, West Mercia Police have announced.
The DNA swabs, fingerprints and photographs will be disposed of in accordance with assurances given by West Mercia Police to people in Kings Norton in 2009.
Detective Chief Superintendent Sheila Thornes, who led the murder case, will oversee the disposal of the samples which will be incinerated at a specialist waste management company in Birmingham on Thursday, September 15.
The samples and photographs were provided voluntarily by men aged between 14 and 40 after a request from police investigating the murder of Mr Arshad who was found stabbed in Wast Hills Lane, Hopwood, on July 22, 2009. His taxi was found dumped about a mile away in Shannon Road on the Hawkesley estate.
Andrew John Bayliss, aged 29, from Kings Norton, Birmingham, is currently serving a life sentence after he was convicted of the murder at Worcester Crown Court in April this year.
Detective Chief Superintendent Thornes said: “As part of the murder investigation we carried out house-to-house enquiries on the Hawkesley estate and Monyhull Hall Road area and asked males living there to provide voluntarily samples for elimination purposes. They were compared with forensic samples recovered from Mr Arshad’s taxi.
“We told people at the time that these samples would not be used for any other cases, that they would not be recorded on any data bases and that they would be destroyed at the end of the investigation.
“As Mohammed Arshad’s killer has been brought to justice we are now fulfilling those assurances, using a government approved company which specialises in the disposal of this type of material.
“West Mercia Police would again like to thank the community for their co-operation during the investigation and helping us to reach a successful conclusion.”