How one Birmingham photographer braved rioters on night of violence 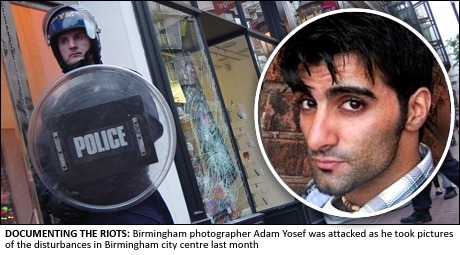 A BIRMINGHAM photographer has told The Asian Today how he was attacked four times in the space of just five minutes by rioters who rampaged through the city centre.
Adam Yosef, 29 suffered a cut to the face and a swollen jaw after he was attacked by a group of youth’s just moments after he photographed them trying to break into a sweet shop in the heart of Birmingham city centre.
Here he relays his experience to The Asian Today.
“I was already filming an event in another part of Birmingham city centre related to the India-England cricket match, when there was suddenly a heavy police presence on surrounding streets. I had heard rumours of a possible disturbance via Twitter earlier in the day from both members of the public and the police themselves but didn’t expect anything major to take place.
As I made my way into the heart of the city centre it was clear something major was happening. Most of the damage was around New Street, High Street and Colmore Row.
The youngsters rioting were mainly interested in targeting shops and anyone who seemed to be in their way. Initially, this was simply to challenge the fact that they felt they were being unfairly targeted but this soon evolved into a mass excuse for looting and attacking local businesses.
The police were trying to control the situation but were clearly outnumbered. They mostly stood back and were focused on creating a boundary around certain areas. Saying that it perplexed me a little as to how the police were so unprepared in terms of cordoning off the city centre considering they were the ones who notified the public of a possible riot earlier in the day.
Most of the public present at the time were trying to stay away from the disturbances but huge swathes got caught up in the trouble after being restricted to the police cordon, whether they were part of the disturbances or not. Most of these were young which suggests an element of profiling on the part of the police. That said, innocent people were the victims of much of the violence as they got attacked by gangs who decided to rampage through the streets.
I was attacked on four occasions within a five minute period as I filmed a large group trying to smash their way into the CyberCandy store on Bull Street. Some girls called on their boyfriends to steal my camera as I filmed. In their bid to snatch it from me, they attacked me before another two young males punched me in the face and neck. Another smashed my glasses off my face and tried to snatch both the camera and the camera equipment bag. They were all unsuccessful as I fended them off but I was left with a cut to my face and a swollen jaw for the following two days.
Another professional photographer was lynched by a gang who beat him up and stole all of his equipment. This was all captured by Birmingham Mail photographer Iain Findlay who himself was badly attacked by thugs on the following night of rioting in the city centre.
Looking back if I’d have known how violent the situation could have gotten I may not have covered the event on my own. I did later keep the company of friends I had met as it became a lot more dangerous.
On the second night of rioting I did venture out with some friends but we felt it was too dangerous so we filmed the scenes on the ground from an apartment. And it was the right decision because the second night was even worse in terms of shop break-ins and targeted attacks, although the overall crowd wasn’t as large as the first night.
Looking back on those nights I was quite disappointed by the week of rioting in Birmingham and the rest of the country. Having covered the 2005 Lozells riots and worked in the community during numerous similar disturbances, I was stunned by how quickly it spiralled out of control. Unlike legitimate protests this was an act of criminal greed being perpetrated on a large scale. There may be some serious and real underlying social issues relating to inner city poverty but this callous looting and the murder of three innocent men in the Birmingham is a dark chapter in the history of the city’s community relations and, once again, we will hopefully recover and learn from it.”