Home Sports Dhoni to be honoured by Midlands University 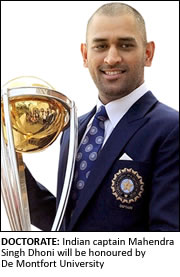 INDIAN cricketing legend Mahendra Singh Dhoni is to be honoured by De Montfort University (DMU) when the team plays Leicestershire in a tour match at Grace Road next week.

Mahendra, who is captain of the Indian cricket team, will become an Honorary Doctor of Letters at a ceremony after the game on Bank Holiday Monday.

His achievements in the cricketing world speak for themselves. Under his captaincy the Indian team has achieved many great things, including wins in the 2007 ICC world twenty20 championships, the 2007-08 Commonwealth Bank one day series and most recently the 2011 cricket world cup.

He holds records for the most catches in an innings and the longest unbeaten run as a captain. He also holds the award for the fastest century scored by an Indian wicket keeper.

In the 2011 world cup final his score of 91 not out secured the trophy for India, finishing with six. In 2008 and 2009 he was also named the ICC’s one-day international player of the year.

Mahendra started his sporting life at school but it was football and badminton that caught his interest to begin with. It was only after his football coach sent him to play cricket for a local club in his home town in Ranchi, East India, that his love and talent for the game became apparent.

His big break came when he was discovered by the Board of Control for Cricket in India’s small-town talent-spotting initiative while playing in Jamshedpur in 2003.

In the same year he was picked for the India A squad and in the few years that followed Mahendra was selected for the one day international tours of Bangladesh and Pakistan.

Mahendra is now an internationally renowned figure and his sheer determination to become a sportsman has made him an inspiration for millions of young Indians and cricket devotees.

He said: “I am amazed and honoured to receive this award.  I see this award as an honour for not only me as the captain of the Indian cricket team but for something for the whole team to be proud of. “

Speaking about the award, Vice-Chancellor of DMU, Professor Dominic Shellard, said: “De Montfort University is honoured to join with our key partner, Leicestershire County Cricket Club, in recognising Mahendra Dhoni’s significant sporting achievements, in the presence of many of our staff and students. This occasion is a distinctive example of DMU’s drive to develop high quality cultural and international partnerships and I am delighted to be able to share it with Leicestershire’s cricket fans.”

Rt Hon Keith Vaz, MP for Leicester East, is an avid follower of cricket and the longest serving MP of Asian origin. He said: “This is a well deserved honour for the captain of the world cricket champions.  A real tribute to India’s sporting success.  We will always remember that day in Mumbai when Mahendra Dhoni lifted the World Cup.  De Montfort University has chosen well.  A first class university honouring a world class captain.”

Eight Indian students studying at DMU will also get the opportunity to meet Mahendra after taking part in a competition run by the university.

Thousands gather to ‘save curry industry’