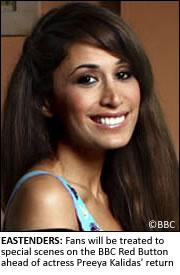 CAN’T wait to see Amira Masood stroll back into Walford and face the man who broke her heart?
Actress Preeya Kalidas will stroll back into the square later this year in what will be explosive scenes as her character Amira comes face to face with husband Syed.
Amira fled the Square after finding out partner Syed had fallen in love with neighbour Christian Clarke.
But she departed with her own secret – she was pregnant with Syed’s baby.
With the newly-engaged gay couple currently planning to adopt a child, Amira’s return will rock the Square – and bosses at the soap are giving fans a sneak preview ahead of her return.
Special scenes have been filmed for the Red Button that will begin to answer some of the questions posed by her dramatic exit from Walford in 2010.
A source from the soap reveals: “As he plans his life together with Christian, Syed’s frustrations begin to grow as his attempts to re-connect with Amira and seek a divorce meet with no success. It is only with help from an unexpected source that his hopes are revived and Amira’s controlling father Qadim is left with the decision as to whether he brings Syed back into his daughter’s life once more.”
Before viewers discover the full impact of Amira’s return, two mini red button episodes will disclose Amira’s world away from the Square and the repercussions that these events might bring to Syed and Christian’s relationship. Caged in her father’s home, hidden in disgrace…what secret will she reveal?
These special scenes can be seen directly after EastEnders on the red button on the 6th and 8th September.