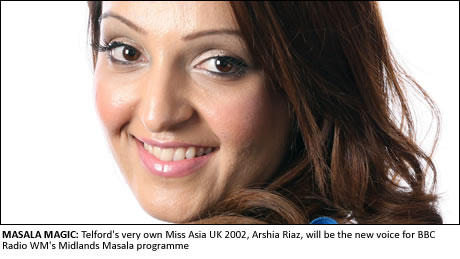 FORMER Beauty Pageant winner Arshia Riaz has promised to bring Masala Magic to BBC Radio WM after she was announced  as the new presenter for the stations Midlands Masala programme.

Originally from Telford but now living in Birmingham, Arshia spent several years producing the hit show. But now she’s going in front of the mic and she admits to looking forward to the challenge.

“I’m looking forward to the challenges it brings and will do my very best to provide a platform for the British Asian community.

“Midlands Masala aims to showcase real stories about issues that really matter, and play the best in Asian music.

“We also have exclusive, live acoustic sessions in our BBC studios performed by both established and unsigned music artists.

“I love helping to nurture talent and every day I meet people who help me tap into that creativity and help it to flourish. All they need is a platform and I am in a position to offer that to them.”

Arshia, named in the top 100 most influential Muslims in the UK , has been working at the BBC for over seven years for radio and online after freelancing for commercial stations across the Midlands.

She graduated from Birmingham City University with a Media and Communication degree before training with the BBC as a Broadcast Journalist.

Her love of journalism began after she took part in an internship working at CNN studios in London.

“It was a real eye opening experience,” she says.

“I remember booking in guests for the business international show and working with some real high profile names, the experience was fantastic.”

Arshia also had the opportunity to experience life in the spotlight when she was crowned Miss Asia UK 2002.

“I remember being interviewed in the old Pebble Mill studios by BBC WM’s Daz Hale about my win,” she says.

“Little did I know that a year later I would soon be part of the presenting line-up on the very station I had been interviewed on!”

Arshia will start her new role on Sunday 24 July 2011. Her first show will mark the one year anniversary of the Pakistan Floods, where she will speak to those that have been affected by the disaster.