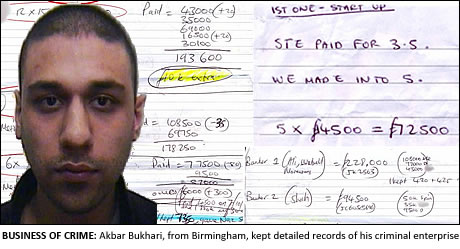 A FORMER Business student who ran a £5m heroin supply system unwittingly helped officials smash his own criminal enterprise when they found detailed records of his illegal network.
Akbar Bukhari, 29, of Talfourd Street, Small Heath, Birmingham, was arrested in May 2009 by officers from the Serious Organised Crime Agency (SOCA) after they secretly watched him hand over a holdall in a street in the Small Heath area of Birmingham.
As well as uncovering a firearm and ammunition, weighing scales and a quantity of counterfeit banknotes, officers discovered a detailed record kept by Bukhari of his wide-ranging and complex criminal enterprises.
Bukhari’s records contained in-depth profit accounting and specified when batches of drugs were ‘in stock’, as well as the quantities supplied to particular customers at a given time. Sale or return information was also detailed, and the records set out a coding system to disguise telephone numbers as they were exchanged among crime group members.
Remarkably his records not only uncovered a partner organisation in the Netherlands which oversaw the ‘cutting’ of heroin with other substances to increase eventual profits, but also the names of five other crime group members who were this month jailed for a total of 100 years for their part in the heroin network.
Bukhari, who is currently serving six-and-a-half-years for the firearms offence, will be sentenced next month for masterminding the trafficking of at least 420kg of the drug over a two-year period between January 2007 and May 2009.
Jailed this month were Brian Blankson, 35, from London and Steven Dobson, 34, from Bootle, who were both sentenced to 15 years for conspiracy to supply heroin and six years for money laundering.
David Edwards, 44, from Liverpool, who was jailed for 11-and-a-half-years  for conspiracy to supply heroin and six years for money laundering, Abdul Haque, 29, from Birmingham, who was jailed for nine-and-a-half-years for conspiracy to supply heroin and six years for money laundering, Kevin Smith, 53, from Tipton, who was jailed for five years for money laundering, and Lee Whelan, 38, from Liverpool, who was jailed for 13-and-a-half-years for conspiracy to supply heroin and six years for money laundering.
Haque, Dobson, Smith and Edwards were enlisted by Bukhari to divide the drugs into blocks, package them for sale, and store them.
They would also transport the drugs and related money throughout England and Scotland. Brian Blankson and Lee Whelan were customers of Bukhari’s group who would distribute the drugs to areas of London, Merseyside, the Midlands and Scotland.
SOCA’s Richard Watson said: “This is the end of the road for a crime group that did major damage to UK communities. It was led by an individual who chose to apply his business aptitude to drug trafficking, and the sheer scale of his gang’s criminal dealings show how important it was that this network was identified and dismantled.
“The lesson for criminal gang members is clearly that no matter how intelligent, educated or professional your associates are, you can never trust them to keep you out of trouble with the law. The members of this network have learnt that the hard way.”