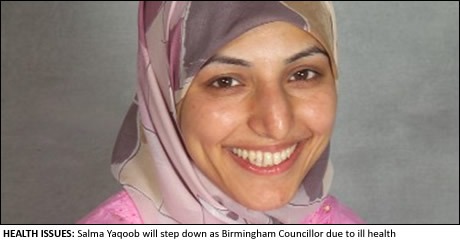 RESPECT leader and Birmingham councillor Salma Yaqoob is quitting politics due to ill health, she has revealed.
The 39-year-old said her decision to resign was not easy but one that “I have had to make in the interests of my health.”
In a statement Ms Yaqoob, who was elected to the city council in 2006, said: “For some time now those close to me have been very aware that I have been battling with health issues.
“Unfortunately over the past 12 months it has taken a turn for the worse. I have found it increasingly difficult to keep up with my very busy schedule, and to satisfactorily fulfil the commitments that my role demands.
“As a result of my worsening health I simply cannot continue to represent Sparkbrook in the way that I think its people deserve.”
She added it was a “real privilege” to work for Sparkbrook.
“I may have been forced to resign as a councillor, but I remain as committed as ever to the struggle for a world free of war, racism and poverty,” she adds.
Through her work Ms Yaqoob is seen as a role model for British Muslim women. In 2006 she received the Lloyds TSB Jewel Award for Public Service Excellence and featured in the Muslim Women Power List run by the Equality and Human Rights Commission.
But her rise in British politics and outspoken views has seen her become a target.
In 2005 she received death threats from extremist groups who opposed her role as a Muslim women in the public eye.
And more recently Birmingham man Stuart Collins was charged with racially and religiously aggravated harassment and threatening to kill the Respect Leader.