Man held in connection with murder and rape of Michelle Samaraweera 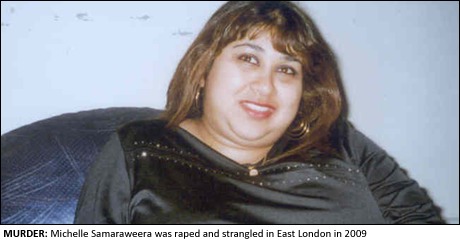 POLICE in India have arrested a man in connection with the murder and rape of a London woman in 2009.
The 26-year-old man was held by Indian police at New Delhi airport.
He is wanted by police in London in connection with the murder and rape of Michelle Samaraweera.
The 35-year-old was strangled and raped as she returned to her boyfriend’s address in Walthamstow, east London, after stopping by at a Somerfield supermarket on 30 May 2009.
Her body was found in nearby park.
As police launched a murder investigation they found her killer was linked through DNA to three other sexual assaults in the area.
The first occurred on 24 March when a 59-year-old woman was raped in her home. A month later a 46-year-old woman was raped in an alleyway near to St James Street rail station, Walthamstow.
Seven days later the rapist struck again, this time attacking a 32-year-old woman close to the Somerfield supermarket which Miss Samaraweera had visited shortly after she was murdered.
The rapes were linked after Miss Samaraweera’s murder.
The Metropolitan Police will now be seeking the man’s extradition to the UK.