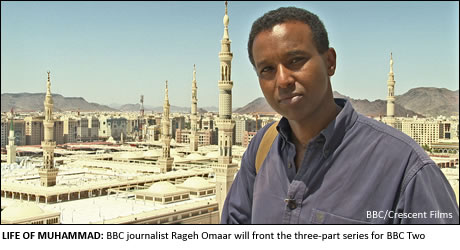 THE BBC is to broadcast a three-part series on the life of the Prophet Muhammad.
‘The Life Of Muhammad’ by Faris Kermani, director and producer of the acclaimed Seven Wonders Of The Muslim World, will chart the extraordinary story of the Prophet
In line with Islamic tradition the series will not depict any images of the face of the Prophet or feature any dramatic reconstructions of his life.
BBC journalist Rageh Omaar travels to the place of Muhammad’s birth to re-trace the actual footsteps of the Prophet; from humble beginnings in Mecca, to his struggles with accepting his Prophetic role, his flight to Medina, to the founding of the first Islamic constitution, and his subsequent military and political successes and failures – through to his death and his legacy.
Filmed on location in Saudi Arabia, Jerusalem, Turkey, Syria, the USA, the UK and Jordan the series also draws on the expertise and comment from some of the world’s leading academics and commentators on Islam, including Tariq Ramadan, academic and fellow of St Anthony’s College, Oxford, and writer and broadcaster Ziauddin Sardar.
Raising questions about Islam’s role in the world today and exploring where Islam’s attitudes towards money, charity, women, social equality, religious tolerance, war and conflict originate, the series offers a fascinating, timely and truly unique insight into the Islamic faith.
Rageh Omaar says: “I am extremely pleased to be presenting this exciting and groundbreaking series about this extraordinary man, Muhammad – the Prophet of Islam. The details of Muhammad’s life really are little known, and I hope that my series will – for many – shine a light on the very beginning of Islam, taking viewers to the heart of this faith, illustrating just how Muhammad’s life and legacy is as important today as it was a over a thousand years ago.”
Aaqil Ahmed, Commissioning Editor Religion and Head of Religion & Ethics, added: “For some people in the UK, Muhammad is just a name, and I hope this series will go some way to explaining who he was, how he lived, what his prophetic message was, and how all of this compares to his legacy today.”
The Life Of Muhammad will transmit on BBC Two in mid-July 2011.