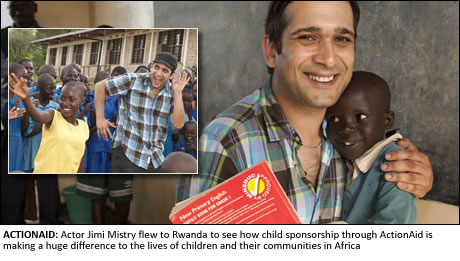 BRIT Hollywood star Jimi Mistry has visited Rwanda to see firsthand how child
sponsorship has transformed the lives of youngsters.


The star of The Guru and East is East went to the country with ActionAid as part
of its Unforgettable Moments campaign to see how child sponsorship makes a huge
difference to the lives of children and their communities in Africa.

Jimi, who is father to 10-year-old daughter Elin, has been sponsoring a child with
ActionAid for several years. He visited the post-conflict country to meet children
who are growing up without a mum or dad.

“As a dad, I want the best for my daughter, Elin. I kept telling her how excited
I was about the visit, but I had no idea what to expect,” Jimi said.

“I was amazed. Rwanda is a beautiful country with warm, humble and dignified
people and given the genocide in 1994 what I saw is even more remarkable.

“ActionAid’s child sponsorship programme is part of what makes people
happy because it works, not just for one child but it changes the lives of whole
families and communities forever.”

The visit took Jimi to Mpanga Primary School – a school that was moved from
the top of a mountain to the bottom thanks to ActionAid’s child sponsorship
scheme.  Previously, the school kids were exhausted by the time they reached
the school, and teachers were hard to find and even harder to keep, as the three
mile hike was so perilous.


Jimi himself did the long trek uphill and also spoke with one school girl, Martina,
13, who had come face-to-face with wild hunting dogs on the trek to school. Worried
for their children’s safety, the community came together and with the money
raised from child sponsorship moved the school to the bottom of the hill and closer
to Mpanga village.

At the primary school Jimi also conquered a personal fear – milking a cow.
Some of the children at the school suffered from malnutrition and the cow was purchased
with child sponsorship money to ensure children received the nutrition they need.


“Often the basics, like milk are taken for granted,” said Jimi. “However,
in Rwanda cows are expensive and because of poverty children often go without food.
Now, in Mpanga, children are flourishing and healthy and able to attend school.

“It was an unforgettable moment watching a little girl called Rachel, who
is just a little younger than my daughter, being given a regular drink of milk and
therefore the chance of a brighter future.”

ActionAid is asking people across the UK to celebrate their unforgettable moments
just like Jimi.  For 50p a day – the cost of a pint of milk – unforgettable
moments can be created for children across the developing world.