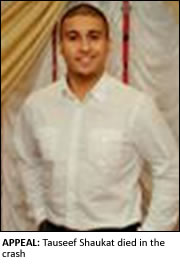 THE FAMILY of a Smethwick man who died following a serious road collision in Oldbury earlier this week have paid tribute to him.
Tauseef Shaukat was driving a Fiat Punto along Churchbridge in Oldbury at around 1am on Monday 13 June when his car was in collision with a Subaru Impreza.
The 24-year-old, from Smethwick, was taken to hospital with serious injuries, but despite the best efforts of medical staff he died a short time later.
Two other passengers in the car, a Fiat Punto, suffered injuries and received hospital treatment.
In a touching tribute Mr Shaukat’s family described him as a “great son and a great nephew who won everyone’s heart with his smile.”
A statement released by his family said:
“Tauseef was a God’s blessing to this world, a blessing of a beloved son and brother and a role model for his four younger brothers and his cousins.
“His life was so tragically taken just two days before he and his family could share the happiness of his 25th birthday.
“His death has devastated his family and his fiancée who he loved dearly.
“He was a gifted son and a great nephew who won everyone’s heart with his smile. His heart and soul has been left behind with his brothers who will carry on with his values in this world. He may not be with his close ones today but his presence will always be felt with the cherished and inspiring memories he left behind.”
Police continue to investigate the collision and yesterday appealed for help in tracing a third man believed to have been travelling in the second vehicle.
Three young male occupants of the Subaru left the vehicle following the collision. Two lads, aged 16 and 17, were arrested nearby on suspicion of burglary and causing death by dangerous driving. Despite officers attending the scene carrying out searches of the vicinity the third male was not found and enquiries continue to locate him.
Police enquiries lead officers to believe the Subaru had been involved in a burglary at a nearby shop a short time earlier in the evening.
Officers had been called to the Co-op store, on Tame Road, at 00.54am today after a member of the public reported seeing people trying to break into the shop. A car was seen to leave the scene.
Sergeant Ferris Hatheson, from the West Midlands Police Collision Investigation Unit, said: “A young man tragically lost his life in this incident and we want to ensure that all those involved are spoken to as part of our enquiries.
“This was a very serious incident and we urge the young man to visit his local police station to assist our investigation.
“However, we continue to appeal for anyone with information to come forward and contact the Collision Investigation Unit as soon as possible.”
The two arrested teenagers have been released on police bail pending further enquiries.
Anyone able to contact the police investigation should call Sandwell Police on 0345 113 5000.