Khan gears up for Vegas showdown 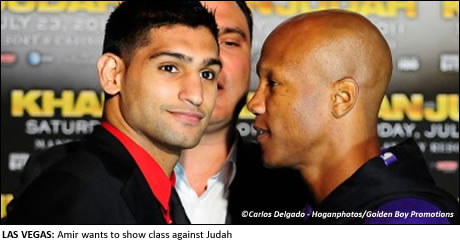 AMIR Khan is ready for his toughest challenge to date when takes on five-time world champion Zab Judah.
The two go head-to-head in a unification fight on July 23rd at the Mandalay Bay in Las Vegas, with the fight screened live on HBO in the US and Primetime PPV in the UK.
Speaking at their LA press conference Khan is adamant that he has the tools to stop Judah, a fighter who has been in with some of the very best, including Floyd Mayweather and Miguel Cotto.
“Zab’s a tricky southpaw who’s won many world titles but I don’t think this is his time.  He doesn’t have the hunger that I do.  I don’t think he can take the belt I have off of me,” said Khan.
“We have a game plan for the fight, so I know how to beat Judah and I’m already way ahead of schedule.
“This is going to be a big fight in the U.S., but it’s also big for my fans in the U.K. and I’m happy for them to come over,” added the WBA light-welterweight champion.
IBF light-welterweight world champion ‘Super’ Judah is convinced, however, that he has the experience and know-how to beat boxing’s brightest young talent.
Despite having won multiple world titles at 140 and 147 pounds he is eager to take the crown away from the reigning ‘King’ of the light-welterweight division.
“I’ve beat a guy from Mexico, from Argentina, from Africa and now I will beat a guy from the United Kingdom – just call me the international assassin.
“I’m ready and focused.  It was a long road back to the top, but this is what a champion is made of.  When they’re knocked down, they rise back up to the top,” Judah said.
“Amir’s an assassin with speed and power, but I’ve been where he’s been and he’s going to have to do it in the lights. Amir can deal with a loss right now.  It’s ‘Super’ Judah time,” he insisted.
Interest in the fight has been huge with Golden Boy Promotions CEO Richard Schaefer tipping Khan to become the best pound-for-pound fighter in the world but warning he faces the hardest fight of his career.
“There has been tremendous interest in this fight.  The casino just ordered an additional block of tickets. HBO has been criticized plenty, but they haven’t been given enough credit for the great string of fights they’ve put on lately,” said Schaefer.
“Both guys are going to come at their best.  That’s the story line here.  This really is do or die.
“We know Zab is a real champion and I believe this is the most dangerous fight for Amir thus far, but this is what Amir wants.  He has set his goals and he wants to be a unified champion.  He knows this is a dangerous fight but you don’t become the best without challenging champions,” he said.
“Mark my words, Amir will be the best pound for pound fighter in the world. Amir is the man because he has the unbeatable team of Freddie Roach and Alex Ariza behind him,” he added.

Mission to Mount Everest for Haroon

The Reigning Prince of Punjab is Back!