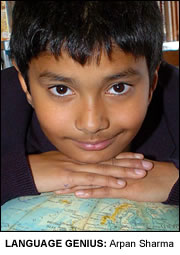 HE’S not even old enough to leave the country on his own, but one ten-year-old schoolboy from Birmingham has stunned teachers with his knowledge of eleven languages.
Arpan Sharma’s talents have been described as “extraordinary” by teachers at the  Blue Coat’s School in Edgbaston, Birmingham.
The youngster, who speaks fluent Hindi after learning it from his parents, remarkably taught himself five of his eleven languages by using multi-media CD-ROMS.
Aside from English and Hindi, Arpan can speak French, Spanish, German and Italian – all of which he learnt at his fee-paying school.
In addition he also speaks Thai, Swahili, Polish, Chinese Mandarin and is currently studying Lugandan – the language of Uganda.
The ten-year-old, from Oldbury, said he hoped to become a surgeon so he could travel the world and work in different countries.
“Learning these languages is my favourite part of school along with music”, he said.
“I have known how to speak and understand Hindi since I was very little because both my mum and dad speak it.
“French, Spanish, German and Italian, I learnt in school and I studied languages that were a bit more difficult by using CD-ROMs on the school computers.
“Learning Swahili was probably one of the biggest challenges I’ve faced and Mandarin Chinese was hard too.
“But the teachers have been really helpful and it’s thanks to them that I’ve managed to learn so many languages.
“I want to carry on studying foreign languages at secondary school next year but I haven’t decided which ones yet.
“When I’m an adult, though, I want to be a surgeon who can work in all the hospitals of the world and speak the language of the country I’m in.”
Deputy Headmaster Richard Lynn said Arpan was the “most talented pupil linguistically” the school have ever had.
“We are extremely proud of him and sincerely hope he continues with his talents when he goes to secondary school,” he added.