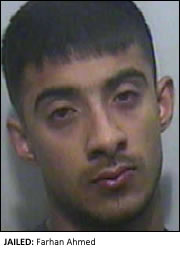 A TEENAGER has been jailed indefinitely after being found guilty of raping a Nelson pensioner.
Farhan Ahmed, 18, of Park Avenue, Barrowford, was found guilty by a jury at Burnley Crown court.
Ahmed was told he would not be eligible to be considered for parole for five years.
The court was told Ahmed broke into his victim’s home on 28 October 2010 and subjected her to a terrifying sexual assault at knife point.
A major investigation was launched with specialist officers from across the force taking part in the inquiry.
Detective Superintendent Ian Critchley from the Force Major Investigation Team said, “This was a nasty, unprovoked attack on a vulnerable and defenceless elderly lady.
“Specially trained officers have worked with the victim right through this case and she has shown exceptional bravery and courage throughout the process. I can’t imagine just how traumatic and distressing this has been for her.
“I am pleased that members of the community have come forward and given evidence in this case.
“Ahmed now has time in prison to reflect on his wicked actions and the pain and torment he brought on his victim.”
The victim, who cannot be named for legal reasons, issued a short statement.
She said: “I am delighted with the response and care that I have received from the Police and the courts since this ordeal began. My trust remains and I have faith that when he is sentenced it will give the young man time to reflect on what he did and hope he can one day feel remorse.”