Bollywood actress to join other Indian stars at waxwork museum 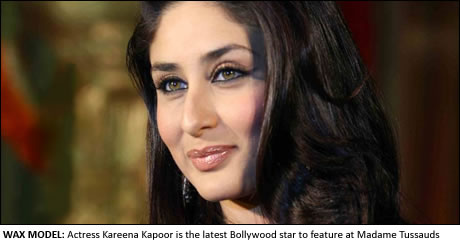 BOLLYWOOD actress Kareena Kapoor is to be immortalised in wax, Madame Tussauds has confirmed.
The actress will be part of a new touring Bollywood experience which will see Bollywood wax models tour Madame Tussauds attractions worldwide.
And first stop for the glamorous star is Blackpool!
“We are delighted to announce this exciting new Madame Tussauds Bollywood experience and to confirm that Kareena Kapoor will be the next Indian film star to be immortalised in wax,” said Nicky Marsh, Director of Global Marketing at Madame Tussauds.  “We have a longstanding commitment to the Indian film industry and Bollywood stars have already been featured in a number of our attractions around the world from London to New York.  With this new experience we hope to give even more fans the chance to meet their favourite stars like Karenna “in the wax” as it travels the world.”
Kareena’s figure will join four other major names in Indian cinema – Shah Rukh Khan, Aishwarya Rai, Hrithik Roshan and Amitabh Bachchan and will tour in Asia, the USA and Europe after premiering in Madame Tussauds newest venue in Blackpool, England.     As well as the chance to get up close to their favourite stars guests will enjoy some additional interactive themed elements and full details are now in the final planning stages.
The actress has given a sitting in Mumbai where the Madame Tussauds creative team took hundreds of precise measurements and a catalogue of reference photographs.  She will be closely involved in selecting the pose and styling the overall look which will show her in glamorous red carpet mode.  The figure will take four months to complete at a cost of £150,000.
Kareena is the first Indian actress to be honoured since Aishwarya Rai joined the A-list line up in 2004 and will follow heartthrob actor, Hrithik Roshan, who personally unveiled his new figure at Madame Tussauds London In January.
The touring Bollywood experience will kick off at Madame Tussauds Blackpool in September and then Bangkok in January before transferring to Hong Kong, , Hollywood, Las Vegas, Washington DC, Berlin, Amsterdam, Vienna and finally London.  It will stay in each location for twelve weeks.