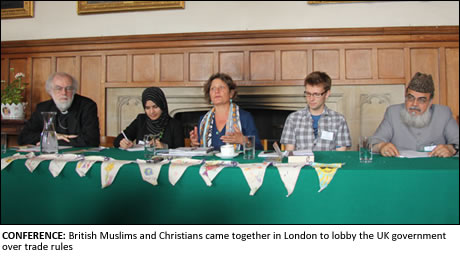 THIRTY young British Muslims and Christians have united in London to lobby the UK government over trade rules.
The youngsters met at Lambeth Palace to agree a statement calling on the UK government to take the lead in ending the EU’s distorting cotton subsidies which prevent over 10 million African farmers from trading fairly.
Critics of the subsidies say they are forcing African farmers into poverty, and along with US subsidies, they are estimated to lose West African countries around $250million every year.
The Christian-Muslim Youth Forum on Trade Justice, organised by MADE in Europe and the Christian Muslim Forum, was hosted by the Archbishop of Canterbury, Dr Rowan Williams and Maulana Shahid Raza, Chair of the Mosque & Imam National Advisory Board.  They were joined by Dr Harriet Lamb, Executive Director of the Fairtrade Foundation and two youth participants for a panel discussion.
The youngsters will hand over a statement to Rt Hon Caroline Spelman, Secretary of State for Environment, Food & Rural Affairs later in the year in advance of the EU negotiations on the Common Agricultural Policy.
Zeenat Azmi, 25, the Muslim youth participant who sat on the panel said: “This is a crucial time to renegotiate for a better deal for cotton producers in the developing world by reforming EU policies that encourage overproduction.
“Addressing trade injustice is essential for sustainable change in developing nations in the long term and it is in all our interests and at the core of our faith to work towards a more equal world.”