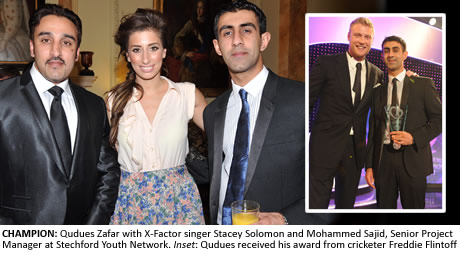 EVERY city needs a champion and 26-year-old Brummie Qudues Zafar definitely fits the bill.
His tireless work helping teens in the high Asian concentration Ward End area of Birmingham saw him crowned one of ten 2011 News of the World Children Champions recently.
Qudues was treated to a visit to 10 Downing Street where he met Prime Minister David Cameron and rubbed shoulders with celebrities including Cricketer Freddie Flintoff and X-Factor star Stacey Solomon at an exclusive awards night held in London.
But for Qudues, a Royal Mail project manager by day, the real achievement doesn’t lie in personal accolades but in knowing youngsters across Ward End are being given the opportunity to make a better life for themselves.
He set up the Stechford Youth Network (SYN) in 2006 in a bid to get bored and restless teenagers off the streets and away from crime and participating in activities to aid their own development.
Today SYN is one of Birmingham’s most successful youth organisations having recently celebrated its 5th anniversary.
“I wanted to give something back to the community,” Qudues tells The Asian Today.
“I think our community is plagued by drugs and other social problems and it was important for individuals to take action rather than always discussing action.”
Setting up the Network, Qudues persuaded the local church hall to be the venue, and successfully negotiated community grants from supermarket giants Tesco and Co-op.
He ploughed the money into pool tables, music players, art and crafts equipment, and as more children turned up, a residential course where youngsters could try more challenging exercises like rock climbing and quad biking.
“SYN is an active community,” says Qudues. “It gives young people an opportunity to have fun whilst learning.”
For Qudues an important part of the Network was to bring youngsters together from all backgrounds and races.
“At the time of setting up SYN there was a large Asian community moving into the area and I decided to implement community cohesion by having an open door policy,” Qudues says.
While youngsters using SYN fall into two categories 8-13 and 14-19, it’s the racial make up of those attracted to the Network which provides a real insight into why the project has been so widely praised.
Despite being situated in an area with a large Asian population, just under half of those who use the project are non-Asian.
Qudues tells us 60% of the Network’s participants are Asian, 30% are White, and 10% African Caribbean – and they’re coming from all across Birmingham to be part of the project.
To date the Network has been at the heart of a number of projects across the city. From summer activities to football coaching, media projects to leadership training, visits to the Houses of Commons and fundraising for charities including Islamic Relief, Qudues has had quite a job on his hands considering he works full time for Royal Mail.
“I have been working for Royal Mail for the past two and a half years now so my time at the Network mainly consists of arranging meetings after work,” Qudues reveals. “I get down to the youth centre most nights and assist where I can. I also book time off at Royal Mail to coincide with training days we have for the youngsters.”
Over the past five years, Qudues has seen the project grow from strength to strength.
He says: “Crime and anti-social behaviour has reduced as a result of the organisation and have been noted through police, fire service and local elected members. It has also trained over 30 strong leaders who are the future blocks of the organisation and growth of the project.”
And the future of the project looks to be in safe hands. Embarking on a pioneering two year project, Qudues is passing the reigns of SYN to a selection of youngsters who came to the Network with nothing to do and will soon be taking it through another chapter in its distinguished history. 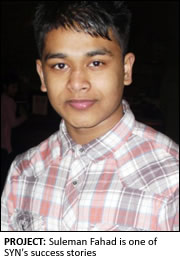 One of those lucky youngsters is Suleman Fahad.
The 16-year-old from Ward End is one of four teens earmarked as future leaders who have been tasked to take SYN forward.
Suleman became involved in SYN two years ago. He admits he only took an interest in the Network to “pass time”, but he soon realised the project was the perfect opportunity to develop his skills.
Suleman tells The Asian Today: “I joined SYN two years ago and initially I only saw it as a way to pass the time. Some of my friends had been going to the youth centre and recommended it to me. After a while I really began to see how the project could benefit me. I became involved in a number of projects set up by Qudues and it’s been an amazing experience.”
During his time at SYN Suleman has created a number of documentaries one of which was broadcast on Channel 4, and recently he was awarded a £2,000 grant to deliver a media project with charity UnLtd which will see the youngster documenting life in Birmingham through the eyes of young people.
But for now Suleman is looking ahead to his new role at SYN where he will manage the projects media and fundraising side.
He describes the role as “amazing”, and lays praise on the man who made it all possible.
“Qudues set up the youth centre to make sure me and hundreds of other kids have had somewhere to go and it’s all done in his own time. He’s a local hero!”
For more information on the Stechford Youth Network log onto www.synltd.org