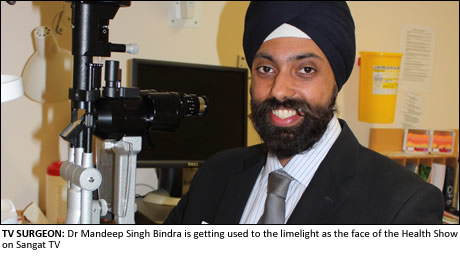 ALL eyes are on a City Hospital eye surgeon who is the presenter and co-producer of a new health show watched by thousands of people across Europe.
Dr Mandeep Singh Bindra is getting used to the limelight as the face of the Health Show on Sangat TV – a Birmingham based TV channel broadcasting on Sky Channel 847.
The hour long show is aimed at bringing health education, awareness and advice to the south east Asian and Punjabi community and so far has included programmes on diabetes, obesity and mental health.
The programme, which screens on a Tuesday evening, is the brainchild of Dr Bindra who for many years has recognised a need in the south east Asian and Punjabi community for accessible health education.
So when he heard about Sangat TV he approached them with his idea and after a presenting a pilot show, producers were so impressed with Dr Bindra’s skills that they asked him to continue to present the show regularly.
He said: “In the Punjabi and south east Asian community there is a real need to address health issues in an accessible way.
“There are issues with accessing healthcare, for example many women do not realise they can have breast screening, they don’t know how to self examine, so by the time they present, the cancer can be quite advanced.
“There are also some issues such as depression and women’s health which are not spoken about openly, and some are even seen as taboo.
“It is important that we address these topics and help tackle them in a way that can be accessed and understood by all.”
Although presenting the show has been very enjoyable, Punjabi speaker Dr Bindra has no plans to give up his day job as an eye surgeon at City Hospital’s Birmingham and Midland Eye Centre.
He said: “It’s been really good fun – it can get very stressful at work so being in the studio has been a chance to do something really different.
“It has benefited me too. Because I research the topics and co-ordinate the guest experts, I’ve learnt lots about areas outside my specialty, and have got to know doctors and health care professionals such as counsellors, GPs and other surgeons, whom I wouldn’t normally deal with.
“I’ve also learnt to describe medical problems in simple language that all can understand, and although I knew medical terms in Punjabi for my own specialty I am now learning a whole new terminology in Punjabi for other areas of medicine too.”
Dr Bindra is also getting used to his new found fame.
“I’ve already been recognised in the community with people saying that after watching the show they have made positive changes in their lives and for their health.”
Any healthcare professionals who would like to talk about their area of expertise or patients who would like to talk about their experiences on the show can email Dr Bindra at msbindra@doctors.org.uk