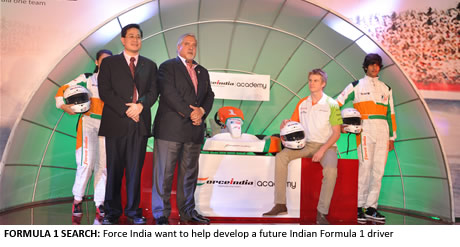 FORCE India has begun a search to find an Indian F1 hero.
The team – owned by Indian billionaire Dr. Vijay Mallya – want to hunt India’s population to find a driver with the pedigree to become one of the sports champion racers.
Their quest – named ‘Hunt for 1 from a Billion’ – will begin in India before coming to the UK’s Silverstone race course in a grand finale with the winner unveiled at October’s inaugural Indian Grand Prix.
The winner will undoubtedly walk in the footsteps of Narain Karthikeyan – India’s one and only F1 driver who will race at the Indian Grand Prix this autumn following a return to the sport.
Force India officially launched the ‘Force India F1 Team Academy’ (FIF1A) – an initiative aimed at identifying racing talent in India for young Indians aspiring to a serious, professional career in motorsport, both on and off the track – last month.
The man behind the academy, Dr. Vijay Mallya described the initiative as a “historic milestone in the sports arena in India.”
With India already reigning supreme as cricketing champions, Dr Mallya is keen on extending that sporting dominance into the world of Formula 1.
He said: “It marks the first time that anyone has ever embarked on such an ambitious programme in India. Our goal is to create a pool of talent and groom aspirants who show exceptional promise by providing them with the necessary corporate funding and support.
“Our programmes will provide a clear professional career path in motorsport so that one day our selected candidates are able to represent India in the international arena and hopefully bring glory to the nation.”
The Academy will devote itself to three key areas – racing talent, vocational training and academic programmes. In its first year, the Academy’s predominant focus will be on unearthing and discovering racing talent, while the initiatives in the other two areas are expected to be rolled out in a phased manner over the following 18 to 24 months.
So who will get the chance to become India’s Top F1 driver?
Well the competition is open to youngsters between the ages of 14 and 17 and they’ll have to excel in selection rounds in one of seven test locations across the country. 100 finalists – 14 from each test city and two wild card entries will compete at a location in India in September to win a place among ten finalists who then move on to the UK Silverstone Finale.
Here in the UK the finalists will be put through their paces in a week-long stint where three of ten will be chosen and unveiled in October at the Indian Grand Prix.
Of the three one will be chosen to compete in a full season of racing in a competitive UK championship whilst at the same time being groomed by the Academy to become a F1 driver.
“The Force India F1 Team Academy was conceived with a vision to inspire young Indians who have talent but have so far had no proper opportunity or serious platform to showcase their innate abilities,” Dr Mallya adds.
“I hope that this Academy will give young Indians, who have the necessary passion and drive, a serious chance to show promise and an opportunity to excel, so that we can develop their talent and grow it by channelling it properly over the long-term. If the Academy is able to place even one Indian on the F1 grid, then all the effort would have been worthwhile.”

Feedback for that 5 most readily useful motorcycle online dating sites 2021. Wish it...