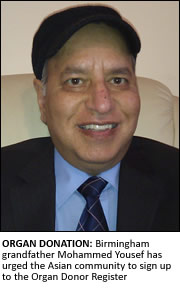 A BIRMINGHAM grandfather given a new lease of life after receiving a kidney transplant has urged the city’s Asian community to consider becoming organ donors.
Shop owner Mohammed Yousef waited six years for a kidney transplant after an 18-year health battle.
His ordeal finally came to an end in February when he underwent a successful kidney transplant – thanks to an Asian organ donor.
But for countless others in the Asian community waiting for the life-saving opportunity given to Mohammed there is a bigger battle with new statistics showing how they have to wait twice as long for organ transplants than the rest of the population.
As a result the NHS is stepping up its drive to get more British Asians to sign up to the Organ Donation Register.
Celebrities including Goodness Gracious Me star Kulvinder Ghir and singers Raghav and Jaya are backing the campaign, as is Birmingham father-of-four Mohammed.
The 55-year-old knew that something was seriously wrong with his health over 18 years ago when he first detected spots of blood in his urine.
After undergoing tests, in 1993 he became an outpatient at the renal clinic at Birmingham’s Queen Elizabeth Hospital when it was apparent that his kidneys were failing. However, things took a turn for the worse in February 2005 when Mohammed’s health rapidly fell into decline and he was immediately put on the kidney transplant waiting list. Almost six years later to the day later, Mohammed received that much waited call from the hospital.
“My family and I were overjoyed and really shocked when I was told that a suitable organ had become available. I didn’t have any hopes that I would get one and was convinced that a much younger person would take priority,” said Mohammed.
“We’re a really close family so we have all been living on the edge for the past six years as my health deteriorated. We didn’t know if I would survive in time for a suitable donor. I still can’t quite believe that I have been given this second chance of life – it’s like winning the lottery!”
Originally from Pakistan, Mohammed came to England in 1967. Before his illness, he had been a shopkeeper for the last twenty years but was forced to take early retirement in 2005, handing the business over to his sons, when his condition worsened.
In the few weeks Mohammed has received his new kidney, his life has already dramatically changed.
“Not only do I not have to be linked up to a dialysis machine for three to four hours at a time, but I’ve been given a new lease of life and can make plans about my future and have much more freedom. I last visited Pakistan in 1995 and have been unable to visit since then because of my health. I’d love to go back and see my aunts, uncles and cousins – especially as they’ve been so worried about me!” he continued.
Mohammed knows only too well about the time some Asian people have to wait for a suitable transplant and the upset this causes them and their families.
“It’s a shame that in general Asian people don’t think about joining the NHS Organ Donor Register as we desperately need more people to come forward as donors – I know I was guilty of this before I fell ill!
“Giving life doesn’t change one person’s life – it changes the lives of their families, friends, work colleagues, neighbours – all the people around them. My experience has made me realise that there are some good people on this earth and I would urge more people to come forward and join the Register so they can give happiness to other families, like my donor did for mine.”
To add your name to the NHS Organ Donor Register, ring 0300 123 23 23 or visit www.organdonation.nhs.uk