Qasim ‘The Dream’ Beg confident ahead of May ‘superfight’ 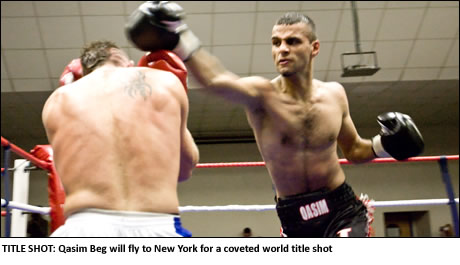 BIRMINGHAM kickboxer Mirza Qasim Beg is getting a shot at the big time – in the Big Apple!
The champion kickboxer, nicknamed ‘Qasim The Dream’, will travel to New York next month to take on three times World Champion Bobby ‘The Jackhammer’ Campbell to challenge for the American’s WKA World Super Lightweight Championship belt.
They fight in Campbell’s back yard of Westbury, New York and this will be Campbell’s fifth defence of the title over a successful two year reign.
The talented American has already fended off a host of challenges to his title including one from British Champion Shawn “Boom Boom” Burton.
But in Qasim, Campbell sees a champion mentality which he says deserves his respect.
“He is undefeated in all of his amateur and pro fights, how could you not respect that?”, Campbell says.
“We look forward to fighting Qasim, as we feel he is one of the best in world, and I always take on the best. Always.”
For Qasim the world title shot is the pinnacle of an outstanding career to date.
A talented cricketer and footballer as a young kid, he turned his back on arguably Britain’s biggest sports to pursue a life in kickboxing after walking into coach Neil Kelly’s USKA kickboxing gym when only 11-years-old.
He’s not looked back since staying undefeated and winning British, European and World titles as an Amateur and now in the Professional ranks with a record of 17 wins with no losses holding two British titles.
His flamboyant yet very effective style is one that has captured him a legion of fans and has been compared to kickboxing’s equivalent of World Boxing Champion Amir Khan.
When word reached him of a possible chance at his own world title he naturally jumped at the chance.
“As soon as I was told I was like, get me the fight,” Qasim told The Asian Today.
“I didn’t care about what I would earn from the fight or the terms and conditions around it, or if I’m honest the title attached to it, It was all about going to New York and challenging such a great fighter like Bobby Campbell in his own back yard.”
Gearing up for the fight of his life, Qasim knows he has to be in the best possible shape if he is to come back to Birmingham a world champion.
He says: “I’ve got my act together for this one, I’m training three times a day, not leaving anything to chance with my diet and strength and conditioning and my coach Neil has devised me strategy and counter strategies as a fight plans for whatever Bobby comes with on the night, I will be ready to seize my chance with both hands and both feet.”

Damaging the Pattern of Teenager Relationships Physical Violence. A couple of will raise understanding of matchmaking assault after their adolescent girl is actually murdered

From Outstanding to Inadequate

Autism in the Asian Community