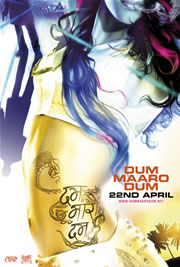 Dum Maaro Dum
Director: Rohan Sippy
Cast: Abhishek Bachchan, Bipasha Basu, Pratiek Babbar, Rana Daggubati
Based in Goa, this thriller is about six characters whose lives change when they become embroiled in the shady and perilous world of the region’s drug mafia.
Life for bright student, Lorry, spirals out of control when he sees his American scholarship rejected. Vishnu, a self destructive police officer assigned the job of destroying the mafia gang finds that nothing is what it seems during his investigation.
Then there is Joki a local musician and mute spectator to what is happening around him. This costs him everything he holds dear.
Aspiring airhostess, Zoe sees her dreams crumbling when she falls foul of Goa’s sinister life. Meanwhile ruthless illegal businessman, Lorsa Biscuta is pushed to the extreme limit with Vishnu’s arrival.
Coming from the makers of the great classic, Sholay, Dum Maaro Dum is expected to have a thrilling script and superb acting keeping you on the edge of your seats.
Following on from the flick, Game, Abhishek Bachchan once again plays the lead alongside hot Bengali beauty Bipasha Basu. The movie features Deepika Padukone in the bold and explosive title song, a contemporary remix version of the iconic classic track originally performed by Zeenat Aman in Hare Rama Hare Krishna.
A very trimmed Deepika worked rigorously for the dance sequence touted to be the best item song ever made from Bollywood!