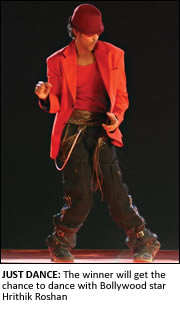 By Supriya Davda
DO you want to shake A leg with Bollywood star Hrithik Roshan?  Well here is your chance!
Star Plus UK is launching a new dance reality TV show where the winner will be able to boogie with Bollywood super-star, Hrithik Roshan.
The show that has been titled ‘Just Dance’, is giving an opportunity to viewers in the UK to participate in the auditions, which will run throughout this month. The winner will be whisked away to India to represent the UK in what is being hyped as the biggest dance shows of Hindi television ever.
Alongside Hrithik Roshan, Farah Khan and Vaibhavi Merchant will be sitting on the judging panel.
The auditions will be taking place all over the UK giving a once in a life time opportunity to viewers to showcase their dancing abilities. Auditions will be held in Birmingham, Manchester, Leicester and London.
So if you think you’re the next Michael Jackson, Prabhu Deva, Madhuri Dixit Hrithik Roshan, Aishwarya Rai Bachchana or Shahid Kapoor here is your chance now.
UK audition dates:
Birmingham: Tuesday 15th February, Warwickshire CCC, The County Ground, Edgbaston, Birmingham, B5 7QU
Manchester: Wednesday 16th February, Manzil UK Banqueting, 29 Bury New Road, Manchester, M8 8EQ
Leicester: Thursday 17th February, The Peepul Centre, Orchardson Avenue, Leicester, LE4 6DP
London: Saturday 19th February, Sheraton Skyline Hotel, London Heathrow, Bath Road (A4), Hayes, UB3 5BP