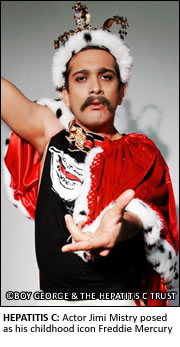 IT was a case of ‘stars in his eyes’ for actor Jimi Mistry as he poses as Queen frontman Freddie Mercury.
The 38-year-old actor posed as his childhood icon for a series of photos taken by former Culture Club man Boy George as part of a campaign to urge the British public to get tested for liver disease hepatitis C.
Mistry – who will hit our screens this month in ‘West is West’ – was joined by other well-known figures including Gavin & Stacey actor Mat Horne who posed as Adam Ant and Sadie Frost who transformed into Madonna.
Speaking at the press launch Jimi said: “I suddenly embodied the spirit of Freddie; I started standing with my chest out but as soon as the moustache went on it all seemed to fall into place. The crown, the raised fist, I was there. It was fantastic. To be photographed by an icon being my icon was quite a memorable day.”
The pictures will go on auction next month