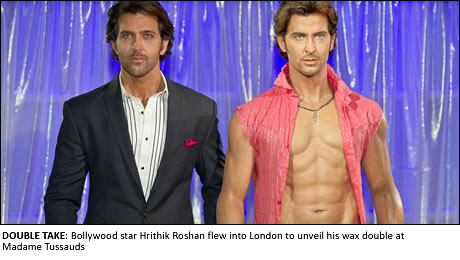 BOLLYWOOD heartthrob Hrithik Roshan flew into London…and came face-to-face with his wax double at Madame Tussuads!
The star worked closely with the world famous attraction to ensure the pose, which was kept tightly under wrap was spot on.
Fans were delighted when the award winning actor was revealed “Dhoom” style.
In homage to one of his most famous roles, he is portrayed in a short sleeved shirt left wide open to reveal his toned and taut body to full effect.
Hrithik who was accompanied by parents, father Rakesh Roshan, mother Pinky, grandfather J Om Prakash, wife Sussanne and their two sons, dedicated the honour to his family.
“I am thrilled that my entire family is with me sharing this wonderful moment. More than the wax figure it’s a matter of emotions and pride that my family is there to see all this. It is made up of what I have received from my parents, grandparents, sister and wife. They have made me what I am. I dedicate this to my family,” he said.
The Bollywood star also spoke about the first time he visited Madame Tussauds as a child.
“I was nine years old, holidaying in London with my family when my grandfather and I went to Madame Tussauds. We had to stand in line for 45 minutes and while I was jumping up and down with impatience and excitement, my grandfather waited patiently.
“I even told him that we should go and come back the next day but my grandfather waited till we could enter Madame Tussauds. Now I feel he’s like that excited child I was,” said the actor.
On meeting his double for the first time Hrithik Roshan said: “I can’t believe I’m here in Madame Tussauds unveiling a wax figure of myself. It’s incredible just how detailed the figure is.”
The star of hit films including Kaho Naa… Pyaar Hai, Dhoom:2, Krrish and Jodha Akbar… is the youngest male actor from India to be honoured by Madame Tussauds.
Roshan was completely involved in the creation of the figure – attending two sittings in Mumbai and London where sculptors captured a catalogue of reference photographs and hundreds of precise measurements. Hirthik also donated the red shirt and dark blue jeans his figure is wearing.
The figure took four months to make at a cost of £150,000 and joins fellow Indian film stars Amitabh Bachan, Aishwarya Rai, Shah Rukh Khan and Salman Khan in Madame Tussauds special Bollywood area.
To co-incide with the launch of Hrithik’s new figure the area has been given an update with an all new interactive touch screen where guests can watch their favourite dance routine from five Bollywood icons.
Liz Edwards, PR Manager at Madame Tussauds London said: “We’re delighted to welcome Hrithik (and his family) and to be including his figure in our Bollywood area. It is one of our most popular areas in the entire attraction and we know it’s going to be even more so with Hrithik now featured in the line up.
“The pose is so striking it is sure to wow fans and get ladies hearts a flutter. In fact it has got to be one of the most daring figures we have ever created.”