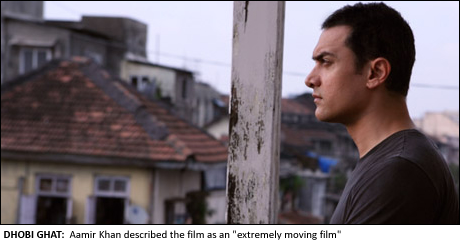 AAMIR Khan – often known as a perfectionist within the Hindi Film Industry speaks to Bollywood Reporter Supriya Davda about his forthcoming film ‘Dhobi Ghat’.
The film marks the directorial debut for wife Kiran Rao, and Aamir reveals why he was so nervous when she recited the idea for the film for the very first time…
When your wife came to you with the idea of Dhobi Ghat, what were your initial reactions?
To be honest, I got a little nervous. In my head I was thinking, what if I don’t like it. I didn’t want to break Kiran’s heart. But the fact is I loved it. The script is beautifully written and each character is so well etched out. Each character in the film has its own voice. It’s an extremely moving film for me. When she read the script to me, I instantaneously wanted to be a part of it. I am extremely proud of Kiran.
When the film was premiered at the Toronto Film Festival, you had said that after filming for this film; you fell in love with Kiran all over again. So I wanted to know what made you fall in love with your wife all over again. Was it her creativity?
I love Kiran very much. But when she came with this script to me and whilst narrating it to me, I was listening very diligently. The idea and characters are so moving, the way the story unfolds is very heart-rending.
As a producer what is your involvement with a film, be it Jaana Tu Ya Jaane Na, Peepli Live and now Dhobi Ghat?
Not a lot if I am honest with you. In terms of involvement I ensure the right environment is created for the director and actors. They have the things they require. Basically that they all have the correct resources to work with. Besides finances of course. I’m also there if any other support is required.
How similar are you to the character you play in Dhobi Ghat – Arun?
I am not like him at all. He is an introvert. He doesn’t allow anyone into his space. He is a little gauche; he doesn’t open himself to anyone. He is like this because he goes through a journey of his own. But this will all appear to you when you see the film.
Dhobi Ghat has an array of some new talent, how was it working with the youngsters? I spoke to Prateik Babbar last week and he said how much he had learnt from. What did you learn from the new actors?
You know Supriya, I felt so proud seeing them do so well. And I learnt a lot from them. That raw talent that they have is exactly what was needed for this film. The three of them Prateik [Babbar] Monica [Dogra] and Kriti [Malhotra] have done a marvellous job. After watching the film, I wished that I could re-shoot my portions, because they are brilliant in the film.
Who would you say is the target audience for this film?
Dhobi Ghat is a film that will work on the international stage for sure. But when I decide to produce a film or to act in it, I am not thinking about the audiences. As long as I love it. This film is for the sensitive kind. It isn’t an exciting film; it’s quiet and will be enjoyed by certain audiences. I am sure we’ll see the effect on the 21st January when the film releases.
Tell us about your forthcoming projects?
Sure, Delhi Belly is a film that I am producing starring Imran [Khan] Vir Das and various other actors. In fact the theatrical trailer will be premiered in theatres with Dhobi Ghat on the January 21, and the film will be released on July 1, 2011. I will also start shooting for a film directed by Reema Kagti, a suspense thriller. The film will also have Rani [Mukherjee] and Kareena [Kapoor]. The film is untitled as of now.
Dhobi Ghat releases on the 21st January 2011.