Actress opens up to Supriya Davda about ‘No One Killed Jessica’ 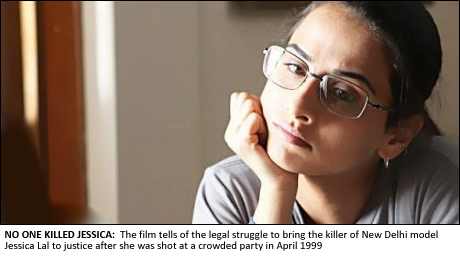 BOLLYWOOD Reporter Supriya Davda chats to Vidya Balan, the actress who has already started 2011 with a high, picking up Best Actress awards for her acclaimed film Ishqiya. Vidya Balan speaks about her new release No One Killed Jessica Lal – a big screen look at the 1999 real-life murder of New Delhi model Jessica Lal.
Is No One Killed Jessica a factual film?
No One Killed Jessica is basically a dramatic thriller. It’s not a docu-drama of any kind. Although it is based on a real life incident of the Jessica Lal murder case it is still an amalgamation of non-fiction and fiction. Having said that we tried to retain the original incident to the maximum extent possible.
Which portions of the film have been sensationalised?
We have known and heard of the case from a very different perspective. What Rajkumar Gupta the director of this film has done is shown a more humane angle to the incident. From the point of murder to the point of Sabrina’s (played by Vidya) struggle with the courts and how she fought endlessly and how the media who worked together to make sure that justice was delivered in this case.
Who plays the role of Jessica Lal in the film?
A beautiful and talented girl, Myra Kam.
You are essaying the role of Jessica’s sister (Sabrina Lal) in the film. Had you followed the case before hand?
Yes I have followed the case from the onset.  I was aware that whatever happened with Jessica Lal was pathetic and condemnable.
You’re look in the film is some what different from all your other movies, sporting baggy tee’s, specs and your shown to be a timid twenty two year old. You’re slouching and you remain to have kept your head down in the film.
That’s a great description! Yes you’re right. Also, in this film, I speak very less, yet I speak through my silence. Raj Kumar Gupta tried to portray the strength of my character in a different way. Also Sabyasachi Mukherjee, who created our look in the film, had seen me in a pony tail and felt that was the right look, and then decided to get those very manly t-shirts. Initially I was a little reluctant, but it all worked out in the end.
Had you met the ‘real’ Sabrina before hand?
No I hadn’t met her. It was only two days ago where I met her at a press conference for the film. I was over-whelmed and honoured to have met a real life hero.
Do you think your mannerisms and gestures were similar to the ‘real’ Sabrina Lal?
I have not portrayed Sabrina Lal the way she is in reality. Like I said I hadn’t actually met her until the press conference in Delhi. Obviously I have seen in her pictures in papers and on the television. But the real Sabrina has already gone through it, so she is a much stronger person today. For me, I had to be more vulnerable.
How do you prepare to play a role like Sabrina Lal? I have very much depended on the script because it’s very difficult when you are playing a real life character, especially one like Sabrina. Although we had access to all the facts, and Rajkumar Gupta had also met up with Sabrina; it is very hard to interpret someone’s emotional journey. It would have been very insensitive of me if I were to have met Sabrina and asked her to relive all that again. Hence to imagine what one would actually go through at that point in time and along with that the director, had a brilliant script that I could use. Each character was very well etched. Like in any other film, my script was my bible.
Has Sabrina Lal seen the film as yet?
No not yet, I’m rather eager and anxious for her to see the film.
How was it working with Rani Mukherjee?  There was a lot of hype about the two of you not getting along?

We got a long very well. And working with her was fabulous. We don’t have too many scenes in this film. But I have always admired her work as an actor. I am really pleased we had the chance to work with her.
You have many fans in the world, and I have been asked to ask you why haven’t you joined the bandwagon of Twitter as yet?
[Laughs] Really? People asked you this. I’m a very personal person, and most of the time I have very little to say. Hence I wouldn’t know what to tweet. But having said that, who knows someday I might.
I am sure you are offered tons of films, but your choice in films is rather unique. What is the deciding factor for you when choosing to do a film?

Predominately the script, my role in it, the director, the producer, but above all of this I think my gut instinct. At times what has happened is that everything seems to be perfect, you have the perfect script, you have a fabulous role, and you have a talented director, the package so to say; but something from within says this is not for you. So, I think, over and above everything is my instinct.

What are you expecting from the audiences? Do you think this film will appeal to the masses?

I hope so. I think Sabrina is a real life hero. I have been inspired by her, the will to fight and I hope the audiences take that away with them.
We don’t see you as often as we would like to, is it a conscious decision that you only do a film at a time?

Yes, I do. Unfortunately I can’t multitask [Laughs]
What will we see you in next?

Sujoy Ghosh’s Kahani, which I’ve now completed work on. It’s a thriller; I’m really looking forward to the release. Then there is The Dirty Picture, which I’ll start work on in a little over a month, and will start preparation for that in a few weeks.
Would you like to convey a message through your fans?