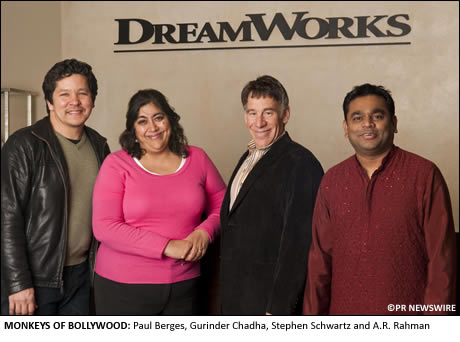 DREAMWORKS – the animation giant who gave us Shrek and Megamind are going all Bollywood!
They have roped in British director Gurinder Chadha and Oscar winner A.R.Rahman for their next venture ‘Monkeys of Bollywood – a Bollywood-style animated musical adventure set in modern-day Mumbai.
Inspired by the great Indian epic tale of The Ramayana – but retold through the point of view of its monkeys – Monkeys of Bollywood revolves around two common monkeys who become unlikely heroes in a last ditch effort to stop an ancient, thought-to-be-mythical demon from conquering the world.
Chadha and husband Paul Berges have been brought on board as writers, while Rahman will join lyricist Stephen Schwartz, who has worked on Prince of Egypt, for the musical extravaganza.
Writing on his Twitter page, Rahman said he was “excited about entering the world of Dreamworks animation.”
There is no news of a release date for the film but Dreamworks did confirm in a statement that it was fast-tracking the development of the film.
Watch this space for more information!