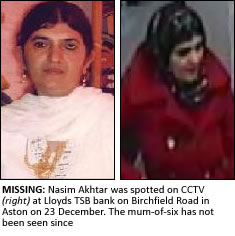 POLICE in Birmingham have released CCTV footage of a missing woman, as they renew their appeal for people to contact them with information on her whereabouts.
The footage is believed to be the last known sighting of Nasim Akhtar who went missing last week and officers are growing increasingly concerned for her welfare.
Chief Inspector Sean Russell, from Birmingham Central police station, said: “We are very concerned for the welfare of Mrs Akhtar as her disappearance is totally out of character.
“Mrs Akhtar’s is a loving mother and her children are missing very much. They and her husband desperately want to know that she is safe and long for her to come home.”
The images, captured on CCTV at Lloyds TSB bank on Birchfield Road in Aston, clearly show the 41-year-old mother of six withdrawing cash just before 10am on Thursday 23 December. She has not been seen since.
Also known as Tina, Nasim, from Norris Road in Aston, is of Pakistani origin but speaks with a Birmingham accent.
She is described as Asian, 5’4″ tall and of slim build. She has brown eyes, shoulder length curly black hair and at the time of her disappearance, was last seen wearing a red coat, Asian style trousers, flat cream shoes and black headscarf.
Nasim was also wearing gold earrings, gold necklace and gold bangles. She has both ears and her nose pierced.
Nasim is believed to have distant relatives in Derby, Nottingham and Leicester.
“I would urge Mrs Akhtar or anyone who knows where she is, to contact police urgently. We just want to know that she is safe and well,” said Ch Insp Russell.
Anyone who may have seen Nasim Akhtar or knows where she is should call West Midlands Police immediately on 0345 113 5000.