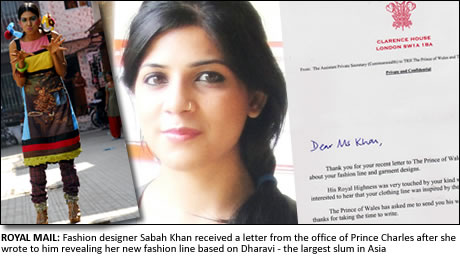 WHEN Sabah Khan, a British citizen, studying at the International Institute of Fashion Design (INIFD) in Mumbai, told her peers that the inspiration for her very first line was the largest slum in Asia, they instantly ridiculed her.
Some of her classmates even went as far as to say, ‘Nobody wants to watch beggars walk the ramp!’ But Sabah did not budge from her theme that centered on Dharavi and forged full speed ahead.
Subsequently she showcased her work, which was aptly titled, ‘No Class’, at the Lakme India Fashion Week 2010.
Sabah, who had spent her formative years in the UK, was totally unaware of the concept of poverty until she shifted base to Mumbai at the age of seven.
Sabah explains: “Up until then, I was shielded from this harsh reality of life. In fact, I remember the very first time I saw a beggar, soon after coming to India, and I was almost fascinated by this man with a begging bowl in his hand. Back then I was too young to grasp the concept.”
But over the years Sabah grew to empathise with those less fortunate than her and eventually she wanted to bring attention to the issue of poverty. Therefore, when Sabah had to come up with a concept for her line, Dharavi instantly sprung to her mind.
Dharavi, which recently shot to fame due to the film Slumdog Millionaire, spans approximately 550 acres.
The shanty town which is home to close to 600, 000 people also houses several industrial units including plastic recycling units, dyeing factories and a potter’s colony.
And Sabah was inspired by these many facets of Dharavi. The recycling area taught Sabah to make ‘optimal use of limited resources’.
And her designs reflect this with lehengas, (traditional Indian skirts), that can be worn inside-out.
The uneven metal roofs of the slum houses inspired her to create ‘asymmetrical cuts and hemlines’. Her designs also featured digital prints of the children of Dharavi who “instantly smiled when faced with the camera even as they were rummaging through waste for their next meal.”
The dye factory and potter’s colony gave birth to a varied colour palette which ranged from earthy tones to bright reds.
But it wasn’t just Sabah who was inspired by Dharavi.
In fact, Prince Charles in his recently released book, ‘Harmony’ had described Dharavi as a model for sustainable living that British towns could follow.
Using this as a reference point Sabah wrote to Prince Charles congratulating him on his book and then introduced her line. In order to describe her work, Sabah quoted from and also attached an article on the ‘No class’ collection which was written by Kiran Mehta for Mumbai Mirror.
Along with this, Sabah also mailed in a few of her sketches. Instead of using email, Sabah opted for snail-mail. “Even as I posted the letter, I never thought I’d actually get a reply,” she admitted.
But two weeks later, Sabah got mail. An envelope with a seal that read ‘Buckingham Palace’. Sabah recollects, “It all seemed surreal.”
And the letter really boosted her morale. The letter which had been signed by the Assistant Private Secretary (commonwealth) to TRH The Prince of Wales and The Duchess of Cornwall, stated that, ‘His Royal Highness was very touched by your kind words, and was particularly interested to hear that your clothing line was inspired by the spirit of Dharavi.’ The Prince of Wales also sent his ‘warmest good wishes’.
Having received encouragement from the royal family, Sabah is now enthusiastically working on her next line. While she doesn’t want to give the concept away, she says that it revolves around an issue that every Mumbaikar will identify with. Will the royals hear of this line too? “Definitely”, ends Sabah.
By Kiran Mehta