Bollywood actor on Tees Maar Khan,Farah Khan and his ‘reunion’ with Katrina Kaif 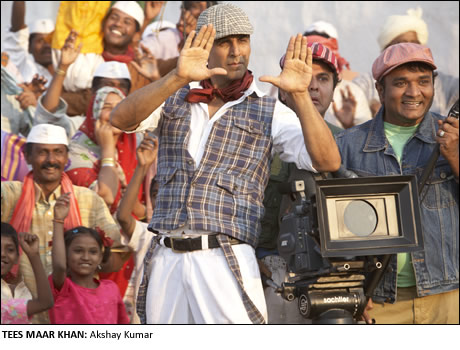 NEVER off our cinema screens, Bollywood’s busiest actor ends 2010 with comedy caper Tees Maar Khan.
The film is the first collaboration between Akshay and director Farah Khan whose previous films ‘Main Hoon Na’ and ‘Om Shaanti Om’ have been box office victories.
We caught up with Akshay during his recent visit to London to talk ‘Tees Maar Khan’…
Tees Maar Khan is already being touted as the next big one. It’s the Farah Khan – Akshay Kumar combination for the first time. What’s your feeling right now?
I would never sit here and say ‘My movie is going to Rock, It’s going to have the biggest opening’ and all that jazz. I’m way too experienced or should I say not stupid enough to ‘toot my own horn’ or my movie like that.
Farah Khan and Akshay Kumar making a movie together for the first time is amazing in my eyes. I’ve admired the woman for nearly two decades now, so my real feelings right now are ‘honoured’, ‘excited’ and of course ‘nervous’.
How was it working with Farah as a Director as well as a Co-Producer?
Well in all honesty, it’s been the smoothest, fastest, easiest and most enjoyable ride in movie making I’ve probably ever had. What can I say? The woman is a perfectionist, she knows what she wants and she won’t shut-up until she gets it!
She’s exactly what I need, she lets me be an actor, she takes care of everything else, the costumes, the sets, the script, the dialogues, the back-ground, the songs, the choreography, she literally directs everything and for a woman with three kids she has the stamina of 10 men!
We shot most of this film in an extremely hot, dusty, deserted village in India’s hottest month, and our Farah was an absolute trooper. She has made this movie so well in quite frankly rather difficult circumstances. I mean come on I found it hard most days and I had a van I could sit and freshen up in when the sun became unbearable and the sand storms became too strong. Farah still never stopped; I feel she deserves a medal for her movie making efforts as well as skill. She always pays great attention to every detail and organises her work so well. Most directors need to lean on brilliant assistants, as great as our crew was, Farah leans on no-one in life.
As an actor, this year has been the most crucial one for you. You’ve had the maximum releases for any actor in your league. How does that feel?

It feels the same as any other year (smiles). It’s been a long time now that I’ve been releasing the most amount of movies per year. I know it’s not everyone’s cup of tea but right now that’s how I like to work. Obviously the gamble is much much higher, but I love to make movies. Of course if they do well that’s great, but as you can see not all releases can be blockbusters. But I get my pleasure out of making films and entertaining daily; I don’t have the patience yet to build up one single movie for one entire year. Not yet anyway!
Does Tees Maar Khan bring Akshay back in the kind of a role that audience love to see him most?
Yeah! You could say that, but as an actor I feel people should realise that in ‘this industry’ it is dangerous if you only do what the audience expects, as it is inevitably dangerous to attempt anything new as well. Hence the reason not every ambitious movie works, one aims to please and show versatility but 90 per cent of the time it goes unwanted. Who said show business was easy hey!
In the film, you come together with Katrina as a couple more than two years after ‘Singh Is Kinng’. After all in ‘De Dana Dan’ and ‘Blue’, there was hardly any screen time that you shared. That must have been some reunion for sure.
Ah yes our beloved Kat! She’s like a colourful stain on my shirt; bright and very loud but I’d miss her if she wasn’t there. She’s going to send me such a nasty message after reading this! Not to worry she knows I think the world of her, and I am proud to say as a producer & co-star this movie couldn’t have been complete without her. She just grows with every opportunity she’s given. She’s always been great to share a screen with, she annoys the hell out of me but I wouldn’t want it any other way!
I always look forward to our yearly movie together, and I must say everyone Kat has hammed her way through this movie like a true Jagtap. Congratulations Kat there is now nothing you can’t do! (Laughs).
Tell us about some of the most memorable experiences you had while shooting for Tees Maar Khan.
What’s not to tell, we had a blast! We laughed our way through practically every day, even the sand storms in Malshed didn’t stop us from shooting. Everyone knows there’s no stopping me or Farah. Mine and Kats face was being literally shredded to bits by the sand and I still made her laugh – but that was just to see her choke really!
This film has also formed a new bond of friendship between you and Salman Khan. He agreed to do a cameo in the film and then you donated a sizable amount to his charity foundation.
Actually me and Salman have quietly admired and respected each other for years, it’s just we have different life styles so outside of work we never see each other. I’ve loved the man for time, donating to his charity was the least I could do, he’s gifted me a brilliant painting which me and Tina adore. You see Bollywood isn’t always what it seems!
Give us three reasons why Tees Maar Khan is a must-watch this festive season?
Because 1) I’m the lead, 2) Kat is my Heroine and 3) because Farah directed it!
Or it could be because it’s Fun, Fast, and Fabulous. I of course being the ‘Fun’, Farah the ‘Fast’ and Kat is most definitely the ‘Fabulous!’
‘Tees Maar Khan’ opens in cinemas across UK on Wednesday 22nd December 2010
Related Articles
Fancy some Popcorn for the film?: Bollywood stars turn cinema staff at Cineworld Feltham
Photo Gallery: Akshay and Katrina at Cineworld Feltham