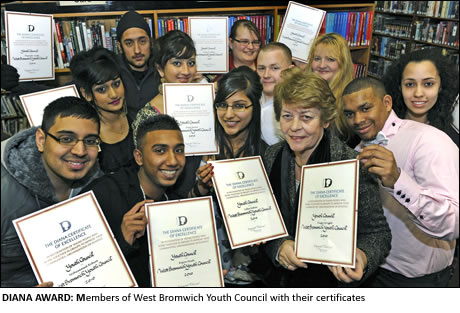 TEENAGE members of West Bromwich Youth Council are celebrating after being awarded a prestigious honour for their community work.
Members of the West Bromwich Youth Council received the Diana Certificate of Excellence.
The award recognises the outstanding contribution of young people aged 12-18 who work together in groups to improve their communities, organisation or schools.
The certificate rewards those who go above and beyond to benefit others, by raising money for charity, campaigning on a local issue or mentoring younger children in their schools or youth groups.
Diego Wright, chair of West Bromwich Youth Council, said: “We have had a busy year and we are very proud of receiving the Diana Certificate of Excellence.
“We hope the good work will continue in 2011 despite government cuts. Young people are the future.”
The West Bromwich Youth Council has been involved in organising and delivering a wide range of activities, including a World Cup Festival and a drama production with Race Equality Sandwell.
Sharon Nanan-Sen, principal youth officer for Sandwell Council’s young people’s services, said: “We are very proud of our young people’s Diana Certificate of Excellence award.
“This will encourage them to continue their work and inspire others to get involved. The young people truly value this award and they are delighted to be recognised.”