All aboard for Khan, Kumar and Kaif 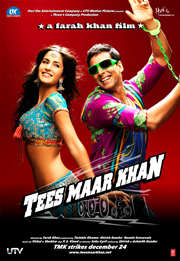 Tees Maar Khan
Director: Farah Khan
Cast: Akshay Kumar and Katrina Kaif
Fearless and shameless criminal, Tees Maar Khan, steals cons and cheats with such alarming audacity that even shame shies away from him!
With his gang comprising of Dollar, Soda and Burger, they managed to keep the police on their toes. Then one fine day international antique smugglers, the Johri Brothers, assign Tees Maar Khan the biggest con job of his life!
He must rob antiques worth 500 million rupees from a heavily guarded moving train! Will Khan and his merry men, with some unwitting support from his wannabe-actress girlfriend, Anya, and a greedy Bollywood superstar be able to pull off the greatest heist in history?
Inspired by English folklore hero Robin Hood, popular star, Akshay Kumar plays the lead role of Tees Maar Khan. Anil Kapoor plays himself in this action comedy as a veteran Hollywood actor who will be seen in the end reels. But there is constant mention about him throughout the movie.
Akshaye Khanna and Salman Khan are said to be making guest appearances whilst Sanjay Dutt is the narrator of the film. For the film’s nail-biting climax, a special train and a 500 metre track were built by art director Sabu Cyril.
Tees Maar Khan has been directed by renowned Indian film director and choreographer, Farah Khan. Khan made her directorial debut with Main Hoon Na (2004) which was a huge success earning her a nomination for Filmfare’s Best Director Award. Her second venture Om Shanti Om (2007) became the highest grossing Hindi film of all time during its opening week.
Considering her excellent track record, Tees Maar Khan is predicted to be her third super successful venture this Christmas festive season!