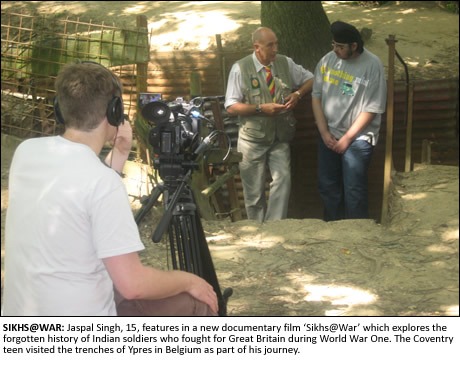 A COVENTRY teenager has revealed how the heroism of his great-grandfather has helped him combat bullying.
Jaspal Singh, 15, features in a new documentary film ‘Sikhs@War’ which explores the forgotten history of Indian soldiers who fought for Great Britain during World War One.
His great-grandfather Maghar Singh was just 15 when he was sent to fight for Britain in the European trenches of the Western Front.
And Jaspal is reminded of his great-grandfathers heroics during difficult times in his own life when he was bullied because of the way he looked.
“I look different, I have a turban. I feel lonely as a Sikh because I don’t have friends that look like me,” Jaspal says.
“Sometimes I feel like cutting my hair so I can fit in. But my Baba Ji tells me about Sikhism and my family who didn’t lose their identity when they were fighting in the wars. I tell myself if they can do it so can.”
Jaspal’s journey is documented in ‘Sikhs@War’ as he traces his great-grandfathers war journey.
The 15-year-old travels from his hometown of Coventry – where the National Sikh War Monument is often attacked by racists, to the battle sites of Ypres in Belgium and Neuve Chapelle in France. On his journey he learns about the heroics of the Sikhs as well as how his great-grandfather would have fought lived and ultimately survived.
The film, which is directed by Birmingham-based filmmaker Jay Singh-Sohal, will be officially launched at the Houses of Parliament this month. It is also being released online as a free educational resource into the sacrifices made by Sikh soldiers for Britain.
The film will also be screened at film festivals in New York, Toronto and in Hollywood next year during its overseas tour.
The story of Britain’s Sikh soldiers is remarkable.
More than 100,000 soldiers from South Asia left their homelands in the Punjab to fight for freedom in the trenches of the European Western Front.
Jaspal’s great-grandfather, Maghar Singh was one of them.
At 15 he left his village of Budha Theh in the District of Amritsar to fight for Britain, following in the footsteps of his own grandfather and uncle who also fought for Britain.
“My grandfather would have seen going to war as his duty,” says Jaspal.
“His own grandfather fought for Britain with the 1st Sikh Infantry between 1850 – 1880 on the North West frontier in Afghanistan and during the Indian mutiny he remained loyal to Britain. His uncle also joined the same regiment and served between 1880-1910.
“My grandfather tells me stories about my forefathers and shows me the medals they won for bravery. It makes me proud when I learn about what they did. “
During the film Jaspal visits the trenches of Ypres in Belgium where his forefather fought and sees for himself the Indian Monument at Neuve Chapelle in France where thousands of Indian soldiers who died are commemorated.
Jaspal’s great-grandfather was one of the lucky ones. He survived World War One, returning to his village in 1918 and taking a German Shepherd dog with him as a souvenir.
During World War Two Maghar Singh was back in the trenches and fighting for Britain on the Eastern Front as well as in Burma. His regiment was disbanded in 1945 and he lived out his life in his village until his death in 1971. His family – in the UK and in India remember his heroics by keeping German Shepherds.
Filmmaker Jay Singh-Sohal said it was important the sacrifices made by thousands of Sikh soldiers was not forgotten.
“Just recently HRH Prince Charles himself commented about the lack of recognition for the ethnic minorities that fought during the Great War,” he said.
“In making this film I wanted to ensure that young people had access to this forgotten part of our history in a manner in which they could see for themselves why it’s still relevant today.
“So we see from Jaspal’s personal journey that remembering those that fought nearly 100 years ago still inspires young people in their daily lives. That there were more than 100,000 Sikhs from the Punjab who fought also says something about the unique relationship Britain’s had with the Sikhs.
“They’ve always been respected as loyal and brave soldiers and continue to form be an important part of British society.”
To view the film log onto www.sikhsatwar.info