Jimi Mistry and Flavia Cacace dazzle on the red carpet 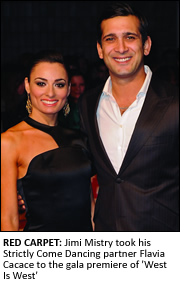 STRICTLY Come Dancing star Jimi Mistry and dance partner Flavia Cacace waltzed down the red carpet for the gala premiere of ‘West is West’ at London Film Festival, last night.
They were joined by fellow cast members, including critically acclaimed Indian actor Om Puri and talented debutant Aqib Khan, for the glittering event at Vue Cinema, Leicester Square.
Talking from the red carpet, Mistry said: “I’ve worked with Leslee and Ayub for such a long time. I was involved with East is East as well. It’s been a big part of my life and the springboard for my career. I will always be there for it. So I came back and I’d say: Thank you for having me back!”
Directed by Andy De Emmony (Fantabulosa) and written by Ayub Khan-Din (East is East), ‘West is West’ reunites the much-loved Khan family of East is East, with original cast members Mistry, Om Puri, Linda Bassett, Lesley Nicol and Emil Marwa returning to the big screen on February 25th 2011.
Newcomer Aqib Khan, 16, plays the lead role as the youngest Khan, Sajid, who is sent back to Pakistan to Mrs Khan No 1 and family in the Punjab, the wife and daughters his father had abandoned 30 years earlier.
Aqib said: “This is my first film role and I’m ecstatic to be walking the red carpet with the likes of Om Puri and Ila Arun! My friends always used to joke that I looked just like Sajid out of ‘East is East’…then my teacher encouraged me to go to an open call audition and I got the part.”
‘West is West’ releases in cinemas across UK on February 25th 2011
See more pictures from the red carpet HERE