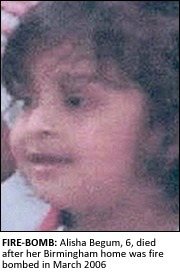 A BIRMINGHAM man who fled the country after taking part in a fire-bomb attack on a home which claimed the life of a six-year-old girl has today been jailed.
Jabed Ali, 27, fled to Bangladesh after the fire at a house in Perry Barr, Birmingham in March 2006.
It claimed the life of innocent six-year-old Alisha Begum. The youngster, who was asleep in her bed when her home was targeted, died of toxic shock.
Other family members escaped from the burning house.
Ali, who was arrested in April after spending more than four years as a fugitive, pleaded guilty to manslaughter and was jailed for eleven and a half years at Birmingham Crown Court.


Another man was convicted of manslaughter and arson with intent to endanger life in October 2007.

Supt Keith Wilson, who led the investigation into Alisha’s death, said: “This was a most horrific crime, whereby a 6 year old child lost her life and a family lost a daughter and sister. Alisha is described by friends and family as a young girl who was always smiling and making others laugh and to have been taken in such traumatic circumstances, even now the family are struggling to come to terms with their loss.

“This investigation has been on going for the past 4 years and today we welcome Ali’s conviction and sentence.

“I hope today Alisha’s family can glean some small comfort by the fact Mr Ali will be spending a considerable period in prison, which will give him time to reflect the pain, anguish and destruction he has inflicted.

“There is still one outstanding offender in this case and this case will not close until he is brought to justice.

“Our thoughts and prayers remain with Alisha and her family. I would like to thank those who have continued to support this investigation and who will do so in future.”