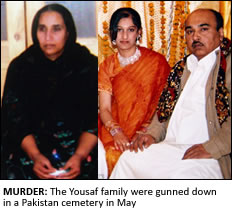 A BRITISH mother on holiday in Pakistan was forced to beg for her life before being shot 100 times, an MP has revealed.
Tania Yousaf, 22, and her parents Mohammed, 51, and Pervaz, 49, were gunned down in May as they prayed at the graveside of a relative in Pakistan.
Yesterday the family’s MP, Andrew Stephenson, raised the case in the Houses of Commons as members of the Yousaf family and their supporters looked on.
Mr Stephenson revealed gruesome details about the death of Tania, a mother of two, and her parents, who were all from Nelson, Lancashire.
She was shot in the legs but managed to run for cover as the trio were ambushed by a gang of up to eight men brandishing machine guns. They tracked her down after killing Mr and Mrs Yousaf and then pulled out a mobile phone and ordered Tania to speak to her husband. He then heard her being shot dead over the phone.
During the debate Andrew Stephenson, Conservative MP for Pendle, said: “The call connected but before Tania could explain to her husband what was happening she was killed with him still listening on the line. To further illustrate the sheer brutality of these murders, I can for the first time, with the permission of the Yousaf family, reveal that at Tania’s post-mortem, more than 100 bullets were removed from her body.”
Mr Stephenson had sought the debate to highlight the case of the Yousaf family who are demanding justice over the killings which took place days after they travelled to the Gujrat district of north-east Pakistan for the wedding of Tania’s brother Asad.
Accused of the murders were brothers Khursheed, Sheraz and Naveed Arif, who were all related to the Yousaf family, and another man Qamar Abbas.
Mr Stephenson said Khursheed died during the killing, while Qamar Abbas was arrested by police after returning to the scene.
But brothers Sheraz and Naveed Arif, Mr Stephenson said, had “unbelievably” been granted bail after being accused of the murders.
They fled shortly after and five months after the murders, they are yet to be apprehended by the Pakistan authorities.
The killings were triggered by a divorce between Mr Yousaf’s eldest son and the sister of the accused.
Mr Stephenson said the Yousaf family have “grave concerns” about how the Pakistani authorities were handling the case.
“The family have tried several different means to secure justice through the Pakistani judicial system. Members will have noticed the significant number of people in the Public Gallery listening to this Adjournment debate tonight, which speaks volumes for the desire of the family and their supporters to get justice through the Pakistani legal system.
“Sadly, however, the killers remain at large and the family still do not have justice. Despite numerous expressions of support and warm words, there has been little progress on the ground in Pakistan. The police seem to have put numerous people in charge of the case since the murders, but the investigation appears to be going nowhere.”
Mr Stephenson added the family had employed a barrister in Pakistan to fight their case but “given the troubled past of the Pakistani legal process-and corruption, which remains an issue-the family seem to have hit a brick wall, preventing any further action or focus on the case from the authorities.”
The family were told by Foreign officer minister Alistair Burt that the government is working to help them get justice.
“We will continue to do all we can to ensure that the most important outcome on the case – that is justice for the family, justice for those that have been killed – is done,” he said.