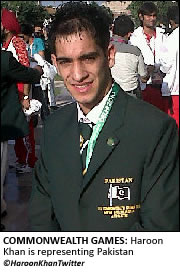 THE brother of world champ Amir Khan has made his Commonwealth bow – representing Pakistan.
Haroon Khan turned on the fireworks by stopping his Tanzanian opponent Sunday Elias in the third round in Delhi earlier this week, and he admits he took brotherly advice from Champ Amir before he went into the ring.
The youngster proved that he is a fighter to be taken seriously in the flyweight category as he produced a commanding display strolling to a convincing win in his opening match.
12-1 up the youngster was showing similar hand-speed to his accomplished brother before a cracking right sent Elias to the canvas leading the referee to call the fight off early in the third round.
Haroon started quickly and was on his opponent from the opening bell, giving him little time to settle as he got on top early in the fight.
The hot prospect is eager to win gold and took the advice of Amir, who rang him before the fight.
“I spoke to my brother on the way here and he told me to ignore the negative publicity and just concentrate on your opponent and bring the result back. And that’s what I did,” said Haroon.
“It’s going to be tough. Every boxer in this competition wants what I want, which is a gold medal, and I’m just going to do my best to grab that.”
Haroon is now set to take on Mauritius’s Gilbert Bactora on Thursday.

How to Hire a Professional Essay Writing Service