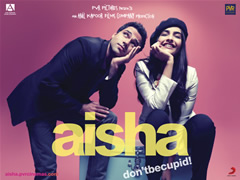 Aisha
Director: Rajshree Ojha
Cast: Sonam Kapoor, Abhay Deol
Aisha is a girl who likes to meddle in other people’s affairs. Basically everyone’s business is her problem. Arjun is a boy with an even more candid belief – Aisha should mind her own business. Caught in the Delhi upper class world with its own set of social rules, Aisha navigates her world with a great sense of style and even greater optimism. Caught in her web are her best friend Pinky, the small town girl Shefali, Delhi boy Randhir and hunk Dhruv. Whilst Aisha makes everyone dance to her tune, Arjun tries to disentangle the web in getting Aisha out of sticky messes. Who will succeed and who will succumb?
Anil Kapoor of Slumdog Millionaire fame presents Bollywood’s first ever chick flick, Aisha.
Capturing the spirit, sentiments and style of modern India and its upper class, the film is a visual re-telling of Jane Austen classic novel, ‘Emma’.
Depicting lives of the rich and ravishing sophisticates inhabiting Delhi’s upper class, Aisha effortlessly combines humour, romance and drama appealing to a global crossover audience.