“It is satire and an attack on the far right!” 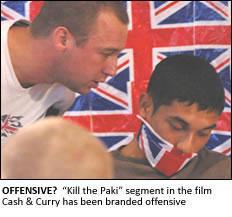 THE makers of a new British feature film Cash and Curry are standing by their decision to include a segment featuring the words “Kill the Paki” being sung by skinheads in a Bollywood style musical sequence.
Cash and Curry, which will be released on DVD in the UK and Ireland on 19 July, features a far-right group called the UK Front which want “their” country to be free of Blacks and Asians. Their battle-cry is “There ain’t no Black in the Union Jack!”
The scene that has caused outcry begins with the UK Front leader Tarquin, played by Jamie Bannerman, taunting an Asian boy who is bound and gagged and at the mercy of the skinheads.
Tarquin leers at the boy and chants the rhyme: “If it’s a Hindu it don’t eat beef, If it’s a Muslim it don’t eat pork, If it ain’t white, It ain’t f**king right!” The scene than turns into a Bollywood style song and dance routine with the skinheads singing “Kill the Paki, Paki, Paki!”
While the film’s director, Sarjit Bains is pleased that Cash and Curry, hailed as one of the most funny and darkly atmospheric British-Asian films of recent times, is finally being released on DVD, he is saddened that the film has been branded racist after a misguided report was posted on a popular social networking site stating that “real-life members of the BNP and English Defence League acted as members of a racist skinhead gang in the film”.
Sarjit Bains said: “The scene is important and has been included for a reason. It was our way of sticking two fingers up at the far right in the UK. However, the skinheads in the film are called the UK Front and this group does not exist in real-life.
“In fact when people see that the racist song is part of a Bollywood style dance routine they will see that the film shows the far right as a bunch of idiots with no real message other than hate itself. The British-Asian community should not take offence, it is only groups like the BNP who will be offended by this film and for me that is a good thing.” 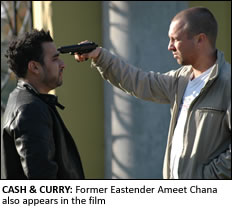 The scene did not put off British Asian acting stalwarts Ameet Chana (Bend It Like Beckham), Pooja Shah (Eastenders), Ronny Jhutti (Eastenders) who have leading parts in the film.
Cameos are provided by Tommy Sandhu (BBC Asian Network), Sofia Hayat (finalist of Channel 4’s Bollywood Star) and tabloid favourite Faria Alam.
The films co-producer is writer-actor Manish Patel who also has a starring role as drug lord ‘Gabbar Patel’. “The scene is completely tongue in cheek. It is a satire and an attack on the far right not on the British Asian community or the British Pakistani community in particular,” he said.
Without giving the plot away, the UK Front are dealt with in an effective manner that sends a clear message to the far right. British Asians are an integral fabric of British mainstream life.
“Our people, Muslim, Hindu and Sikh have died for this country and we’re not leaving. In fact, the sequence is no different from the ‘Throw the Jew Down the Well’ song in Sacha Baron Cohen’s Borat film,” Manish added.
“I remember in the seventies when we were all ‘Pakis’ regardless of whether we were from India or Pakistan. In fact, in the near past if you were Chinese you would have been a ‘Paki’ as far as the far right was concerned.” he added.
Cash and Curry will be released on DVD in the UK and Ireland on 19 July 2010. It will be available to buy online from Amazon and Play.com on 19 July 2010 and in-store from HMV and Asda from 25 July 2010.