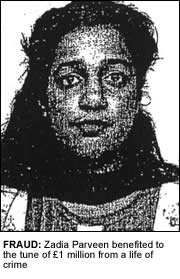 A WEST Midlands couple who cheated the tax system out of nearly £1m could face another six years in jail if they fail to pay nearly £800,000 from the proceeds of their crimes.
Zadia Parveen, 41, and her husband Mohammed Shabir, 47, from Sutton Coldfield, Birmingham, lived a life of luxury after making a number of false claims.
They defrauded HM Revenue & Customs (HMRC) of an estimated £100,000 in tax credits and £254,545 in income tax as well as being involved in money laundering.
The duo, who have four children, were sentenced in March at Birmingham Crown Court after investigators discovered the couple had made false claims for tax credits and failed to declare earnings from a taxi business and private tutoring.
The couple used the cash to buy a house for £480,000 and invested £500,000 in income bonds.
Parveen was sentenced to a two year community order and ordered to carry out 240 hours of unpaid work, while her husband was sentenced to two years and eight months in prison.
But the couple now face an additional six years on their sentences if they fail to repay £752,303 by the end of the year.
Adrian Farley, Assistant Director of Criminal Investigation for HMRC, said: “The couple supported their millionaire lifestyle by stealing a great deal of public money and were motivated purely by greed.
“We are determined to bring to justice the criminals behind this type of fraud and to take away the proceeds of their crime.”
Related Articles
‘Millionaire’ husband and wife tax crooks sentenced