Measures to improve security at jewellers on Leicester’s golden mile 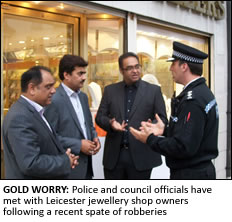 POLICE and council officials are working with jewellers in Leicester’s Golden Mile to increase security at stores after a spate of robberies.
Representatives from the police, council, jewellery shops and Belgrave Business Association met following two raids at jewellery shops in a week.
Police have already charged a number of people with robberies at Alankar Jewellers and Bipin Jewellers, but there is a heightened state of fear.
A number of security measures were agreed when police met with jewellery shop owners last month.
They agreed a number of measures including enhanced security for the stores; an increased policing presence in the area; and the provision of crime prevention advice leaflets for customers when purchasing gold.
Chief Superintendent Rob Nixon, City Area Commander for Leicestershire Constabulary, personally visited the victims of both incidents ahead of the meeting, together with the leader of Leicester City Council Veejay Patel and Dharmesh Lakhani, chairman of the Belgrave Business Association.
He said: “I wanted to personally meet with the owners of the businesses affected to reassure them that police in the city are taking these incidents very seriously.”
As a result of the meeting, the Safer Leicester Partnership agreed to increase the use of SmartWater in jewellery shops on Belgrave Road. This includes the installation of spray systems in some businesses which, when activated, spray the intruders with a fine mist of SmartWater to forensically link them to the crime. They will also look into the possibility of installing bollards outside shops to prevent vehicles from mounting the pavement.
It was also agreed that jewellers will meet monthly with the neighbourhood sergeant for Belgrave to discuss any concerns. Work is also being undertaken to raise awareness among customers purchasing jewellery of simple crime prevention measures they can take to protect their gold, such as being careful when wearing it in public, storing it securely in their homes and taking photos to assist the police in the event that their jewellery is stolen.
Bihesh Pala, owner of Alankar Jewellers which suffered a robbery at the shop last month welcomed the new security measures.
“We are quite impressed with the way that things are happening and moving forward,” Mr Pala said.
“We all need to work together to make a safer area for everyone. Just because of a few robberies we don’t want to put the area down.”
Councillor Veejay Patel said: “Leicester is very proud of the Golden Mile and we are committed to supporting local businesses to make them, their customers and residents in the Belgrave area feel safe. We are working together as a partnership to develop improvements in security and the business community are heavily involved in this.”
Dharmesh Lakhani, chair of the Belgrave Business Association, added: “I would like to thank Chief Superintendent Rob Nixon and City Council leader Veejay Patel for visiting the affected businesses personally and reassuring them of their commitment for a safer Golden Mile. The sight of greater police presence in Belgrave will make it a safer place for all concerned. I would particularly like to praise the police force for their quick response in apprehending suspects for both of these burglaries.”
A 22-year-old man has been charged with a robbery at Alankar Jewellers, while a 33-year-old man from Birmingham and a 25 year-old-man from Leicester have been charged in relation to the robbery at Bipin Jewellers.