Hoods to be placed over ‘Terror Cameras’ that ‘Spy’ on Muslims 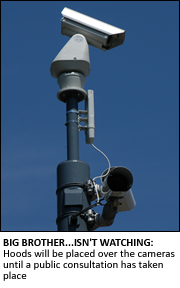 MORE than 200 anti-terrorist surveillance cameras put up in predominantly Muslim areas in Birmingham won’t be switched on following uproar from the community.
The spy network, which consists of 169 ‘ANPR’ cameras capable of checking car registration numbers, and 49 CCTV cameras, were put up in the Sparkbrook, Moseley and Washwood Heath areas of Birmingham by the Safer Birmingham Partnership.
Following widespread criticism officials were forced into a climbdown, admitting they would be placing protective hoods over all of the cameras. “Cameras Not in Use” signs will also be fixed to street columns
Critics have said the cameras, some of which are hidden, are being used to spy on the Muslim community after it emerged the initiative was financed through a counter-terrorism fund.
Local councillors and representatives from the community say they were not consulted on the camera network called ‘Project Champion’.
A number of heated meetings have taken place by angry residents and local MP Roger Godsiff tabled a Commons motion expressing his concern saying the only function of the project was to “monitor extremists that the police and MI5 suspect to be living among Birmingham’s Muslim community.”
In all, the controversy forced the Safer Birmingham Partnership into a grovelling apology in which they said they said the camera’s would not be switched on until a “full and in-depth public consultation” into the implementation of the camera network had taken place.
In a joint statement Assistant Chief Constable Suzette Davenport of West Midlands Police, Cllr Paul Tilsley, Deputy Leader of Birmingham City Council and Jackie Russell, Director of Safer Birmingham Partnership apologised for mistakes they said had “undermined public confidence in the Police and the Council.”
“A number of issues have been raised in relation to Project Champion and we believe it is right to give local people a chance to express their views,” the statement said.
“We completely accept that earlier consultation with councillors from Sparkbrook and Washwood Heath – the main focus of the project – should also have included elected representatives from all other areas affected.
“We also accept that we should have been more explicit about the role of the Counter Terrorism Unit in the initial project management of Champion.”
The statement continued: “Although the Counter Terrorism Unit was responsible for identifying and securing central government funds, and have overseen the technical aspects of the installation, the camera sites were chosen on the basis of general crime data – not just counter terrorism intelligence.
“Day to day management of the network was always intended to become the responsibility of local police.
“We apologise for these mistakes, which regrettably may have undermined public confidence in the Police and the Council.
“Public safety is a primary concern and, having seen the benefits that existing ANPR and CCTV networks have brought to other areas of Birmingham, we remain confident that the inclusion of these new sites will further reduce crime and anti-social behaviour at all levels.”
But despite the apology Salma Yaqoob, leader of the Respect party and councillor for Sparkbrook, said the camera’s were “stigmatising an entire community.”
There is going to be an attempt to resell these cameras on the grounds of enhancing community safety and crime prevention,” she said. “I understand people’s concerns in this regard.
“And I am supportive of CCTV projects in certain circumstances. But Project Champion is different. This is funded on the grounds that its primary objective is anti-terrorist surveillance. The Police say these cameras should reassure us.
“The message is that they have the opposite effect. Ringing an entire area with spy cameras is stigmatising an entire community.
”These spy cameras are sinister, divisive and damaging of trust between the community and the Police. They must be taken down and Respect Councillors in Sparkbrook are committed to campaigning against them until they are taken down.”