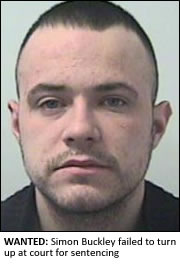 TWO people who threatened witnesses over a fatal house fire which claimed the lives of a Bolton woman and her granddaughter have been sentenced.

Tracey Peers-Holland, 26, of Hawthorn Road, Bolton, pleaded guilty to witness intimidation at an earlier hearing and was sentenced to 12 months in prison, suspended for two years. She was also ordered to carry out 200 hours unpaid work.

A 16-year-old boy from Bolton also pleaded guilty to affray and was sentenced to a nine-month referral order.

A third defendant, Simon Buckley, 24, of Tonge Moor Road, Bolton, failed to turn up at court today to be sentenced.

Police have issued a photograph of him and are appealing for the public’s help to trace him.

The fire, on Little Holme Walk in Bolton on 23 June 2008, claimed the lives of Hameeda Begum, 71, and her granddaughter Alana Mian, who was four, as well as leaving a firefighter seriously injured.

The occupants were rescued from the house by firefighters, but Hameeda later died in hospital. Alana died a number of weeks later on 1 August 2008.

Alana’s mother, Saima, and firefighter Steve Morris, were also seriously hurt but were later released from hospital. Steve is still recovering from his injuries at home.

On the evening of Tuesday 14 October 2008, Buckley, Peers-Holland and the 16-year-old boy went to the house of a murder investigation witness.

Buckley told the man who lived there: “I’m Simon and when I find out who has been giving statements I will firebomb their houses.” 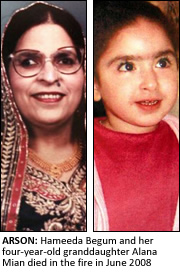 The boy then swung a punch at the witness, narrowly missing him.

Another witness told police Buckley actually said he was going to ‘petrol bomb the house, just like he’d done the p***s house.’

Detective Chief Inspector Jeff McMahon, of the Major Incident Team, said: “This terrible blaze has left an indelible mark on the family, the local community and the emergency services who dealt with it.

“Intimidating witnesses is unacceptable and a very serious offence. It takes a lot of courage for some people to speak to police and they should be able to do the right thing without feeling vulnerable or scared.

“To go round intimidating a witness while police were trying to conduct their investigation only added to the tension in the community.

“Buckley has failed to turn up at court to receive his sentence so I now want the public’s help to tell us where he is.

“This fire investigation also remains open. I would appeal to anyone who may have any information that could assist me in finding whoever is responsible to come forward. As today’s case shows we will take action against anyone who tries to stop justice being done.”